Something I noticed now that I’ve had a number of horses arrive and leave again in my first two months here, is that I’m more than before trying to compare and assess them as they come in. I can be totally right and totally wrong about how they’ll turn out or how quickly they’ll be able to make a change, is what I’ve been realising, too. 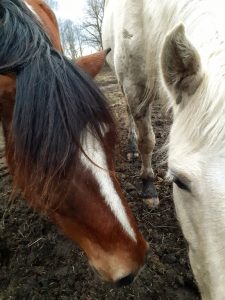 When they first come in and are under the stress of transportation I can quite easily determine which ones are more apt to strike and kick and run into pressure when feeling trapped and unsure, and which ones would rather freeze and huddle in a corner without moving their feet (I’m learning that, in a way I’d rather have the kicking and the striking than the huddling and the trembling, as they really seem to check out in such a state, and might not come back into their bodies, so to speak, for quite a while. It’s hard on me to see them in such a place, so overtaken by the need to protect themselves – I cannot really help them there). I’m not saying that all of these horses start to either kick and strike and tremble and freeze as soon as they come off the trailer – quite a few of them, the majority actually, aren’t so bothered to begin with at all, and never get to that state where they feel they have to protect themselves to that extent. With them I’m really trying to keep it that way.

What I’m trying to say is that, some of them are a lot more, I’m not sure how to say it, troubled and concerned to start with. And I’m not always sure what it has to do with. Sometimes I do. Like with the coloured mare that was brought here when her foal was just weaned off her that day. She was confused, scared, then got transported and taken to another place. Kicking up high with both hind feet was all she could do, I counted forty times in a row that first evening when I went to let her out and she caught sight of me nearing. Her crookedness and the fact that she has never been trimmed didn’t make moving her feet very calming to her either. It’s taken me 15 times working with her now, and I can touch her and be near her. Her eye has softened, but she’s still always got her leg cocked in unsureness – she’s very ready to go but trying to stay, but she doesn’t need to kick anymore. I’m still proving to her that I can be trusted, and it feels like, once she’s convinced, she’ll be soft forever. With her it feels like there’s a force just under the surface, not only that of motherhood, but some other strength, too. It leaves me in awe of them, of that bit of spirit or wildness, however you want to put it. With most of them it feels like that. 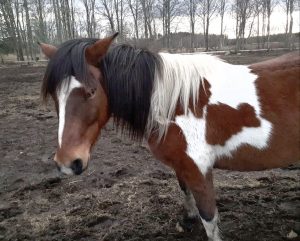 I’m fascinated by these horses’ individuality. I like to watch them. Day by day, they show me more of themselves. It snowed for a couple of days and I’ve taken things a little slower – it gave me the opportunity to spend a lot more time with them out there in the forest, instead of them spending time with me in the barn or the roundpen. Somewhat of a reversal of roles. It’s been a good change of scenery.

These young horses seem to learn incidentally, almost accidentally. Initially I went to find them out there to see whether no one had hurt themselves. Then I went because I knew they wouldn’t have hurt themselves – it just feels good ploughing through the snow, to visit them and be among them while the world around us turns still. Snow has this contemplative, static feel to it. In a way I let down a little on the “teaching” part. Not that I’m all Jane Goodall about it now, but I’m being very aware of when I turn into that I-have-to-get-things-done-mode. 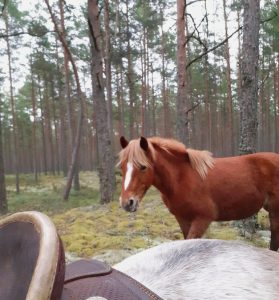 It’s very pleasing to me that these horses like me more now. They don’t mind me. They don’t need me, but they don’t mind me. Friends have asked if I’m not lonely out here, if I’m happy. Truth is I don’t really think about whether I’m happy or lonely or sad or whatever. It doesn’t seem to matter all that much. I do know I’m quite consumed by the silence and alone-ness. My senses are working overtime and I see things I didn’t see before. It’s a new stage in my horsemanship, one that not everyone gets to live, and I’m thankful for it.