We’ve said goodbye to January, and it’s been a good three weeks since I wrote my first blog for Eclectic Horseman. There is more daylight every day now, which is a delight in so many ways. Every Estonian I speak to says there might still be a chance for snow this winter. Nevertheless January has been mild to say the least.

Work has intensified. I currently have 12 unhandled colts in for halterbreaking and gentling, from yearlings to 4-year-olds. Some of the older ones are here for starting as well. I was going to write that I’ve now more or less settled into a daily routine that is efficient, but that’d be a lie. Efficient isn’t the right word, though a part of me would very much like to use it.

So here’s the thing: I am quite sure that everyone who works multiple horses a day wants to be efficient with their time. You want to save your energy. Twelve horses is a lot for me. On the best of days I get to work nine of them. 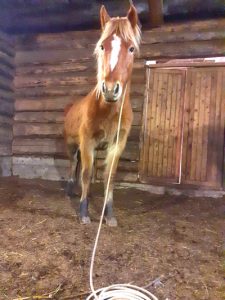 Yet as soon as I start thinking about being “efficient” things kind of go south. I can be efficient when it comes to getting chores done, about having things in order. But these horses don’t care too much about me being efficient. (They don’t really care about me at all of course; they’d rather just be out there eating some and playing some, and getting on with life as they’ve known it.) They surely aren’t interested in being around the version of me that wants to be efficient, because that version of me also loses patience, loses feel, and is in an incessant internal dialogue with her ego. Not all that fun. I don’t want to be around that version of me all that much either.

I think most of you can guess that I’m working from a pretty remote place, and spend most of the day by myself. I’m on an island, for starters. The dust road leading up to the farm is about 6 kilometres long. No complaints here, I have nowhere to be apart from here – I love the more solitary life and am pretty good at it (though I have to admit I’m on the lookout for a good dog companion). It’s in the silence that we most clearly hear our thoughts though, and they’re not always what we would like them to be.

So, this is what I’ve been working on – mostly within myself: I’m trying to get the picture right before stepping foot into the barn in the morning. I’m working on easing off ON time. On taking fresh starts instead of messing up what I had, but knowing what it is that I’m looking for. On calling it a day on time, so I don’t get into situations where I missed the green light the first time, and now have to stay at it till late because it’s going to take a while until that permission shows up again. 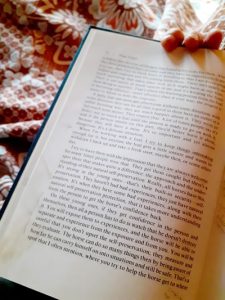 I find myself turning to Tom Dorrance’s True Unity when looking for advice on the littlest ones. They are already slightly less little then I would like them to be, and squirmier than would be ideal. There’s a line in that book that has been helping me out these last couple of weeks, and seemed to jump out from the pages. He says: “I try to leave them with the feeling that they are always welcome.”

Wow, good gracious is that hard when you feel you have a job to do. I don’t want to get them into sink-or-swim situations, I don’t want to flood them, but I do want them to feel that I’m sure, without being ambush-y. If anything is applicable here from the many things I learned from Mindy Bower, it’s not to tip-toe around the issue. Mindy would call me out on mandy-pandying, which I always thought was quite funny given my name, but I did learn from it – or at least I know sooner now when I’m doing it. (We’re very good at mandy-pandying in Europe.) 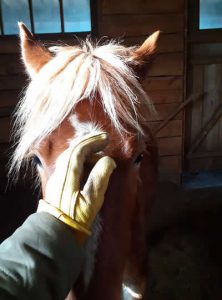 If I’ve been tiptoeing around one issue in particular it is that the colts allow me to rub them on the forehead, between their eyes, while being in their binocular vision. Being so intent on being able to get near them at all, I’ve been quite happy starting out at their wither and slowly working my way towards their head, around their ears, eyes, and so on. Some of them haven’t been very defensive at all about their heads, and those have not made a big deal of the haltering. Others, though, I‘ve cut quite some slack as they were so skittish in the beginning; I thought that giving them more time would help them. And it did. A couple of them really blossomed in terms of their curiosity coming out, and got really soft in their leading up and groundwork on the lass rope. The more I, however, allowed them to put me in one eye or switch very fast, even just an inch, while approaching them from the front, the more I unknowingly built in a brace. I’ve been scratching my head a good couple of nights this week, and then it was a simple Ray Hunt statement (“I never found a halter that fit onto the tail end of a horse”) that kind of unveiled to me what I’d been doing: I had been tiptoeing around the issue, and the issue was not going to just go away.

SO, big learning for me. I will remember the time it took to fixing this the last couple of days for a long time. We take too much for granted with our older horses. Being allowed to rub them on the forehead is a privilege, but it’s important. I won’t ever take that for granted anymore.

So, until next blog, and greetings from Estonia, where the colts are having fun outfoxing me a little bit less every day!