In my last blog some weeks ago I talked about stillness and silence. It felt as if I was in some sort of flow with my horsemanship, mostly thanks to the social isolation I’d put myself in, willingly – because of the silence, not in spite of it. Of course things are a little different now that social isolation is no longer a choice, and the words have taken on quite a different meaning lately.

Three weeks ago, Europe suddenly got coined the new “epicenter” of the virus, governments all over the world started to speak in terms of a state of emergency, and new measures were announced almost daily; now, three weeks on, the situation, however extraordinary, seems to settle a bit now that people get used to this new normal. At least from my vantage point here in rural Estonia it does. I would have flown to the Netherlands for a two-week-visit and some horse training for clients at the end of March, but the flight was cancelled. That same day, Hiiumaa shut, the island where I’m staying, ferries to the mainland of Estonia now only operating for permanent residents with essential business on the mainland. Most of the borders of surrounding countries, like Sweden, Denmark, Poland, and Germany are locked now, so I decided to stay put, though the Dutch Ministry of Foreign Affairs did send word about repatriation options. 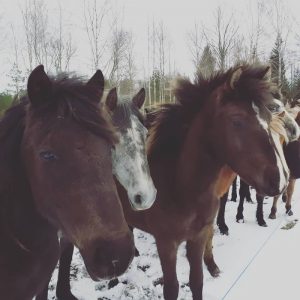 Spring is here. Bees, butterflies, mares in heat, young geldings all studly and out of their minds. Hair everywhere. Best of all, the daylight hours. Staying put, working horses, enjoying watching and bonding with my new dog, waiting out the storm and not watching too much news – the world is not fine, but I somehow am. It feels like a confession. It might be the same for some of you reading this, living on ranches and in rural areas. What else can we do but be thankful for a new spring?

Other than the global upheaval, which we can read about everywhere else but that horses don’t know about, I wanted to write a little follow-up on the colored mare Karinna, who I wrote about in my last blog. (Short recap: Karinna is a four-year-old who’s had at least one foal and had not been touched or handled when she came in. She had/-s pretty loose hind feet and just had her foal weaned off her when she arrived. You can read my last blog here.) 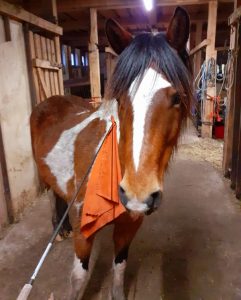 Karinna is another confession. She is one of those horses that force me to stay awake and re-think most of what I learned to be true, my timing and understanding of main horsemanship principles in different situations. Take a main principle such as approach & retreat, pressure & relief. When I found out that Karinna was unsure about having her front legs touched, I dwelled there. I dwelled there with my flag, and I’m a little embarrassed to admit it, for two weeks. After I got her to keep her hind feet under her instead of high in the air kicking, and to turn and look at me for relief instead, I decided the next logical thing I’d do would be short sessions checking her out with my flag. I thought I’d do these until I’d get a change. (Another confession, with so many other horses to try and fit into a day, I often saved Karinna till later in the evening, the last horse before going in. You probably get the idea: hungry and tired and working a wild horse don’t go together really well. Karinna wasn’t having it.)

Long story short, I didn’t get a change doing that. I think I just made her mad, built resentment. Where, when I wrote my last blog I could actually touch her on the wither, after I started my Desensitization Masterplan she quickly resolved to just huddling there, tuning me out. She wouldn’t kick, but alternately hold her front legs up mid-air and scrape the floor, shaking her head wildly, meanwhile looking at me like she’d kill me in the next life. Touching her didn’t make things better. With everything Karinna has in her she tells me she’s not the touching type. She might be able to tolerate grooming in the future, but she’s not the kind of mare who’ll ever look for it. She doesn’t in the herd either. Always standing alone or chasing the yearlings. She’s a wildling. 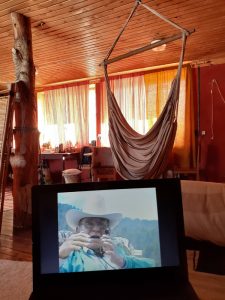 Looking for information, I coincidentally came across a bit in Tom Dorrance’s Greetings video, where Bryan Neubert and Tom discuss something that made me sit up straight. Bryan said that, in his experience when he was starting the wild horses, he found that staying at troubled spots would, in some cases, just add gas to the fire, and that he would get nothing out of doing that with some of those that wanted to strike, except a tired arm from holding the flag so long. Tom confirms that finding, saying that “sometimes if you insist on clearing that up on one leg, it gets worse. But if you withdraw, do something else, then come back to it, quite often there is no problem anymore.”

So, leave it alone. Let it clear up without insisting on it. Come back to it later. You might find it’s not there anymore. I can’t tell you how much this helped me. Also, how much this resonates with me regarding the rest of my life. As with all these insights they are important because when they hit you, they relate to almost everything.

I cannot sugar-coat the Karinna story. No happy ending just yet. We’re still at it together. The very next thing I did when aborting the Desensitization Masterplan was working her in movement again, and then I accidentally roped (ROPED!) her when just swinging my rope. I mean, holy s*it! How was I ever going to get if off her, was my first thought. Then, and I’m not joking, I sent Mindy a transatlantic text, telling her, with Karinna on my rope, now very angry and terrified but catching a breath from torpedo-ing around. Mindy went: “How can you be texting, get to work! Go slow, but be effective”. It’s quite funny. I’m out of my depth with this mare; all I have to go on is her eye that tells me when I get it right (she’s kind of sparse with her encouragement, but her eye can get really soft). But we’re working at it, and we’ll get there. And no, I didn’t have to cut my rope (yet).

So. Confessions in times of Corona and Karinna. Trusting that quite a lot of more experienced horsemen read and follow Eclectic Horseman Magazine, I think of this blog as an opportunity for me to discuss cases sometimes. Think through them as I write them up. They may help some others, and they may be a way for others to help me along a bit. Please feel free to get in touch. From Estonia, with love!