It’s been a while since the last blog, the dog and I have been on the road travelling since mid May and only this week returned to Estonia. Midsummer here on the island, which means that it doesn’t really get dark. I’ve never before experienced this continuous light. For the dog it’s a reason to just not go to sleep at night. I hear her living a very exciting life outside at 2, 3, and 4 am. She makes up for her late night outings with extensive naps midday.

It’s a slow Sunday morning as I am writing this, I just finished reading Tom Moates’ article on Locating the Horse’s Mind in Eclectic Horseman’s 112 issue. So I send you musings and slow, scattered thoughts. I hope your Sunday is as peaceful as mine. 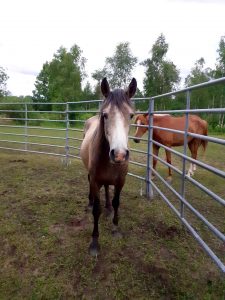 Three new horses in for gentling this week. Two fillies, one young gelding. They are opposites. One is like the horse Tom describes in the article, a tiny little Estonian gelding called Sammi, whose mind is everywhere at once. It’s hard to catch his attention for more than 2 seconds, let alone catch the horse. He’s drawn to anything and everything, and his feet just follow his nose. Here, there, here, there. Hey, wait, what’s there? He doesn’t want to be caught just yet, protects his left side in a way that makes me think he’s been caught for less than nice business before. He reminds me of another little Estonian filly I had last winter. Fast on her feet, athletic, ever ready to outlast and escape you. Very fun, curious little rockets they are, some of these Estonian Native horses, if they allow you to catch them, that is.

There is another filly, chestnut with flaxen mane, high on her feet. Not Estonian. She didn’t blink the first two days, the white of her eye fixated in the dust-filled rays of light coming into the barn. She just stood there in the stall, motionless. The second day she let me rub her and halter her, still motionless, blinking only very occasionally. I decided to make use of that catatonic state she seemed to be in, and start with haltering her and asking her to follow the feel of the rope slowly instead of moving her around and trying to hook her on – knowing it might be risky to work from a standstill. It felt like the right thing to do. She didn’t seem absent. Just the opposite. She seemed right there, very, very attentive. Still, like a sculpture, but feeling of me with her whole being. Yesterday, on the third day, she reached for me as I approached her. Very different from day one. Catching her mind when she’s moving may be a whole other issue, but that’s for tomorrow. 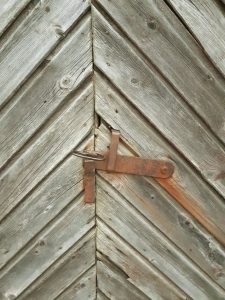 The last mare is already older, maybe four. Agnes. Comfortable in her own skin. She seems to have decided humans aren’t the best. She might have had a foal already, but I don’t have that information. It doesn’t matter. She puts little effort in her resistance, but she doesn’t need to do much to make sure I cannot get to her. Smart, perceptive, not afraid but sceptical. She’d like things to stay the way they were, to keep on roaming free and be without humans. I cannot blame her. I also like to be back in the forest and see few people. I like the routine, the quiet predictability of the days, the way the barn door squeaks and how you can only get it to open if you aren’t rushed/ frustrated/ impatient/ angry [fill in the blanks …] and lift the handle just right. That barn door reminds me of the concept of Feel and the horsewoman I hope to become one day, every day I go through it. 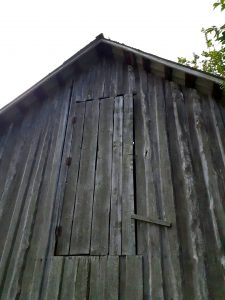 I’m thankful for this place. It might not be the most expensive or fancy equine facility in the world, things are old and broken more often than not, but it’s a barn that serves its purpose. It gave me a place to be and work when it snowed and stormed and was dark out this past winter, and well, the forest is our arena the rest of the time. There’s enough space for everyone, though lately a fox ate the chickens. I sweep it clean before I go to sleep at night and the horses like to come in when they hear the high-pitched sound of the barn door opening in the morning, looking for some grain. And also usually, after some days, for some human closeness.