“It’s a unique learning experience,” says horsemanship clinician, Mindy Bower, about the joint venture between Melanie Smith Taylor and her called TaylorMade Horsemanship. “I think this is a unique opportunity to combine the two worlds.”

Just glance at their website, taylormadehorsemanship.com, and it’s clear what two worlds Mindy means. There’s her photo on the left—she is ahorseback, coiled reata at the ready tied to her western saddle, wearing an impressively brimmed flat-hat, shotgun chaps, and wild rag, and even a dedicated cowdog loping along beside them. Juxtaposed on the right one sees Melanie—she is standing beside her internationally legendary show jumping horse partner, Calypso, and is donning a classic English pink coat, tightly fitting riding breeches, and sporting around her neck a wide ribbon weighed down by that big Olympic gold medal she won in Los Angeles in 1984.

Unique and unlikely indeed is this pairing of what typically are considered the opposite ends of the equestrian spectrum. And, until now, in a single clinic setting one would expect that, “never the twain shall meet!”

“These will be clinics that combine groundwork Mindy does with the flat work and jumping exercises that I do,” Melanie explains. “And, that try to help people get to the real source or root of their problems with horses.”

TaylorMade Horsemanship is new this year. Melanie says they have six clinics scheduled at venues in May, June and August in Tennessee, Illinois, Indiana, Florida and California. She views this season as a pilot program to get things officially launched. And, even though the venture of this clinic business in this particular incarnation is brand new, the evolution of dovetailing these two prominent equestrian women into a single clinic experience has been years in development.

“We share the same principles and just really enjoy each other,” Mindy says. “Melanie ‘gets it’ [a deeper understanding of horsemanship]. That’s what’s so fun, she understands what it’s all about. She’s a rare commodity. There’s hardly anybody else I can think of that’s brought the worlds together like that.”

“I retired from show jumping in ’88,” Melanie says, “and moved back to Memphis, met Lee, my husband, who introduced me to Ray [Hunt], and eventually Buck [Brannaman]. We had clinics with them at the farm every year for 15 or 20 years. After watching and working with Ray and Buck I realized how much I had missed about understanding the inside of the horse .

During these annual clinics, the Taylors invited friends to share the learning experience starting around a dozen colts each year. Mindy, at that time a student of Ray’s and often working with Buck, made the trip from her home in Colorado to Tennessee and became an annual participant at the Taylor’s Wildwood Farm clinics. Lee and Melanie would usually send several colts home with Mindy each year for further training. In recent years, Melanie and Mindy collaborated on a series of clinics for young hunter/jumper riders through another organization, further solidifying their teaching partnership.

“I had a really great admiration for Melanie long before I met her,” Mindy says. “I remember saving the Practical Horseman with her on the cover—and that was in 1984, so that was a long time before I met her. When I got to meet her I was excited, and then when I found out that she had Calypso in the back yard, I was really excited! I just thought, that is the coolest thing ever to meet that horse and that rider. It’s kind of funny that now we’re together doing clinics. I’ve really enjoyed working with her over the last few years doing the clinics we’ve been doing together. So, it’s sort of a natural progression. We’ve been out on the road testing out what we wanted to do and now we feel like it’s ready to go. We’re really excited about it.”

The idea for TaylorMade Horsemanship, however, is not new and began many years ago with another Taylor—Melanie’s late husband, Lee.

“When I retired from competition I met Lee,” Melanie explains. “He was an amateur polo player and he never considered himself a great horseman but he was a great horseman because he gave every horse a chance. He didn’t care how pretty they were, what their bloodlines were, how much they won—it didn’t matter. He took every horse on an individual basis. He was already having clinics there on the farm with Ray Hunt, and that’s where I met Ray. I don’t know that I would have won any more [if she’d met Ray earlier in her career], but I know that I could have helped more horses.

“If we can make a difference with one person that helps one horse, then it just sort of networks from there. That person helps another person. We hope that we draw people, young and old, that are interested in doing better things for the horse, and developing a better connection and partnership. This is sort of a pilot year of clinics—and then I’m hoping to roll it over into a non-profit so that outside people can participate and be able to scholarship kids. My goal is to be able to reach kids that maybe couldn’t otherwise afford these opportunities and be able to scholarship them. That was my husband’s original idea, to develop a scholarship program for developing horsemen, and that’s my goal. So I just wanted to get something started to see what the feedback was and hopefully in the future be able to really do some wonderful things for young people. Give them opportunities they might not otherwise have had. Basically helping the horses through helping the people that share our passion for them.”

There is no shortage of other irons in the fire for Melanie at the moment, either. Her new book, Ride with Life…from the Ground Up, which collects her thoughts and lessons for the aspiring equestrian, will be released this spring. Mirroring the new clinic arrangement, the book includes Mindy’s input on a section involving groundwork. Then, this summer in July, after the initial run of TaylorMade Horsemanship clinics, she’s off to London to work as a television commentator for the 2012 Olympics.

Even with Melanie’s clear mastering of competitive jumping at a global level, it is telling that the first line on the website describing the new clinics reads: “This program is NOT a competition.”

“I don’t like it to be a competition,” Melanie says, “where they’re trying to get there faster than the other person—because we know when improving communication with your horse you can’t put a time limit on it. You can’t work by the clock. You work at it until you find a place to stop. You find a little success and you do what it takes. It all depends on each horse. The competition can come out later but with these clinics there’s no competition…really learning the value of connecting with the horse. I want it to be a fun thing, but something people really value—a partnership with the horse.”

Mindy says her job is in part teaching people to recognize what they don’t know about horsemanship. Often that means introduction to a level of horsemanship quite basic for folks more familiar with the work of Tom Dorrance, Ray Hunt, and their contemporaries. For example, she says, regularly people attended their clinics in recent years with horses they are willing to ride and jump but that they are unable even to halter and lead from the stall to the arena without a wreck.

“I try to get those people working their horse from the ground so that they can start to develop some feel,” Mindy says. “Horses in that realm [competitive sport horses], they do their job but that’s all they do. And if you try to change it, it really is an upsetting thing. They don’t have any flexibility in their mind. They’re not really flexible horses, and it’s only because of the way that they’re handled. They don’t know any better.”

Lee passed away in 2005, and Melanie says she vowed to forge on with his dream to establish a non-profit foundation for horsemanship. TaylorMade Horsemanship is the initial step in realizing that dream.

“I used to strive to be a better rider each day than I was the day before…” Melanie posted on the website, “but now my goal is to be a better horseman each day that I am lucky enough to spend with a horse. This I owe to Lee and his awareness and ability to share his passionate view of genuine horsemanship.”

The schedule for the initial six clinics is available at the website (taylormadehorsemanship.com) along with the registration form and much additional information. The new book’s release also will be announced there.

“I can help more horses by helping the people that ride them and work with them and share our passion,” Melanie says when asked what she’d like people to understand most about TaylorMade Horsemanship. “So that’s my goal, to try to reach as many people because through the people we will reach that many more horses.”

Riding with Life by Melanie Smith Taylor and Jamie Caton 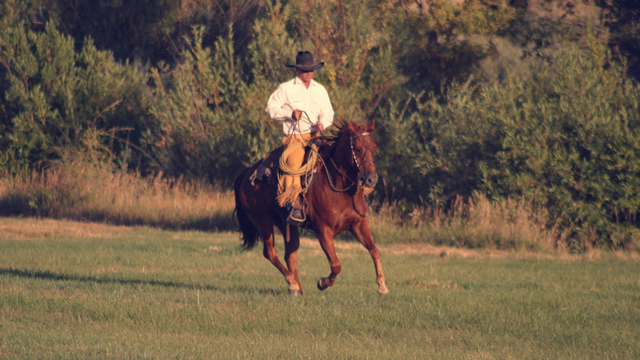