By Monday, August 10th, the Soda Fire was the largest wildfire in the nation having scorched over a quarter of a million acres of south-western Idaho. On that day, the blaze charged across a high mountain brush field on Martin Black’s ranch near Bruneau where his horses are summered.

“There were some ranchers close by that were haying and they saw the fire take off,” Martin says. “They said within 20 minutes it had gone through this field where my horses were—a big, rocky, side hill kind of an area. Lots of tall sagebrush and lots of dry grass basically to fuel it. So there really wasn’t anywhere for the horses to go and there wasn’t any time for anybody to do anything. But what the neighbors told me is that they saw the horses running ahead of the flames and they went out of sight. They were watching thinking that would probably be the end of them, and then the horses, almost like a circus act, they just come running back through the flames. They didn’t even see them coming until they busted through the flames. The flames were higher than the horses, and they got behind it to safety.”

There were 21 horses in the herd. All of the horses survived.

“The horses that apparently were in the lead, my two bridle horses, Frosty and McRoanie, the hair on the inside of their ears was burnt right down like you shaved it,” Martin says. “They had second degree burns all up their muzzles to their jaw muscles. Eye lashes, whiskers, fetlocks—totally gone. Half the manes and tales, the lower half if you look where it thins out and the hair gets finer, it burnt up to where the manes and tails get thick. A lot of these horses had tails well below the hocks and they’re well above the hocks now on most all of them. One horse, Frosty, had an ulcer in his eye, but with some eye cream and some skin cream everything is healing and of course the hair will grow back, so it’s just a matter of time. They’ll heal 100 percent, we’re expecting. So just some doctoring and waiting for hair to grow back and things will be normal.”

Martin refers to Frosty and McRoanie as his Special Forces Horses, and it seems they lived up to their titles during this emergency.

“Those two were the two who were obviously in the lead,” Martin surmises, “because they had the second degree burns on their faces. Nobody else had second degree burns. A lot of the horses didn’t have the hair burned out of their ears like those two. Those two obviously were in the front. I wish I knew, but I’ve got a picture [in my mind] that as the horses went through, they stomped the flames down to some brief degree because the younger horses, 10 of the 21 were yearlings, and they’re the ones that have the least hair burnt on them. So it makes since that they were in the back, and these two horse were in the front, and all the other mature horses were the middle there somewhere. You can just see the different levels of burns on the horses on their hair.”

Wildfires are a concern every year in many ranchlands in the U.S. The Soda Fire, however, is creating concern that its size and ferocity, which included at least one fire tornado spiraling 100 feet into the air, signals a new era of larger fires than have been seen previously in the region due to greatly increased available fuel, according to Martin, who is a fifth generation rancher himself.

“The BLM has cut the grazing back for the ranchers significantly in recent years, they claim for environmental reasons, which is a major contributor to the size of this fire,” Martin explains. “Nobody can ever remember fires of this size other than numerous lightning fires that burn together. For one fire to burn this much, I don’t know that we’ve ever had one in the history of range fires. I think that’s noteworthy that it’s the range management that has caused the size of this fire.”

Martin says the amount of grass, the wind, the temperature, and the low humidity conditions are not abnormal this year—rather, the biggest difference this year regarding the Soda Fire was the amount of forage that had gone unused for numerous seasons previous to it.

“We don’t have a count on the cattle [that were killed],” Martin says, “but I’m expecting it to be in the several-hundred range. I know several people who lost 30-50 head.”

Other horses were not so lucky as Martin’s. Station KBOI reported that so far it is known that 27 wild horses died in the fire and two were put down due to severe injuries caused by the blaze.

“Plenty of people have been asking how they can help,” Martin says. “We don’t need the help near like these other ranchers do. Some have completely lost their livelihood for the next however many years. They have no grass, they’ve lost cattle, and that’s their livelihood.”

To help the ranchers in need directly, Martin asks that donations be made to the Owyhee Cattleman’s Heritage Foundation which has set up a fund for this purpose. To find out how to donate money or other goods and services to help those affected by the fire visit the Owyhee Cattlemen’s Association website www.owyheecattlemen.com/Topics/soda-fire/. 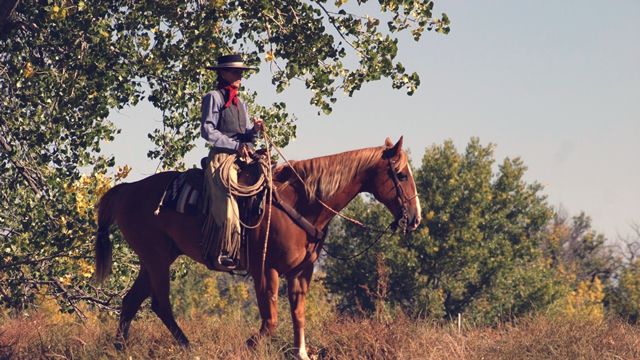