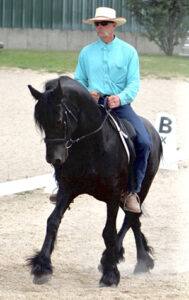 Achieving the half pass is often begun by introducing a travers (haunches-in) to the horse. In this movement, the horse bends into the direction of the line of travel. This requires a lot of lateral suppleness, and is ridden as a four- track movement at about an thirty five degree angle.

The rider’s position is instrumental to the success of a travers. The upper body is square to the line of travel as the rider’s body is influencing the angle of the horse’s hindquarters.

To introduce a travers, keep the forehand walking straight down the track, with a slight bend in the neck to the inside. Then shift your weight to the inside and move your outside leg slightly behind the girth. In the beginning, you’ll want to achieve success by only asking for three or four steps, and then allowing the horse to straighten out again.

Moving into the half pass 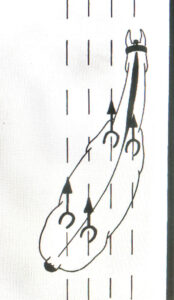 To begin this movement, the rider needs to have their shoulders leading while putting the horse’s forehand on the line. Then engage the hindquarters   by putting your weight to the inside and bringing the horse over with your outside leg. Shoulders will be leading in the finished product.

The horse should move simultaneously forwards and laterally, bent toward the direction of travel and bent around the rider’s inside leg.

The forehand should precede the hindquarters by about half a stride while maintaining forward momentum. Both the horse’s front and hind legs will cross over in the half pass.

For instance, in a left half pass, the right forehand will step in front of and cross over the left forehand. The right hind leg will step in front of and across the left hind leg towards the horse’s centre of gravity. This pushes the horse forwards and sideways. Thus, the outside hind leg is the driving leg, and the one which does most of the work. A well-executed half pass has lateral reach and elevation of the horse’s shoulders as well as a correct cadence and uphill balance. 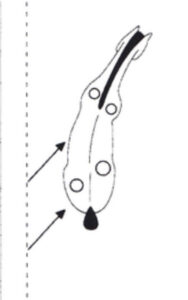 Begin this work in a walk. Always end on a successful note. A stride or two will suffice. It may take lots of time for the horse to advance into a trot half pass. It can even be years before the horse can perform a half pass in a canter. The horse will provide the answers to when its ready to advance. Staying within the beauty and harmony of the relationship is key.

Donnette Hicks is a horsewoman who bridges her ranch background with nearly two decades of dressage experience. She teaches and works with horses through the Grand Prix level enjoys exchanging ideas with horsemen across the world. As a freelance journalist, she blends her education with poetry, photography and film. Donnette and her husband Jim own Sage Creek Equestrian in Heber City, Utah. For more information go to sagecreekequestrian.com