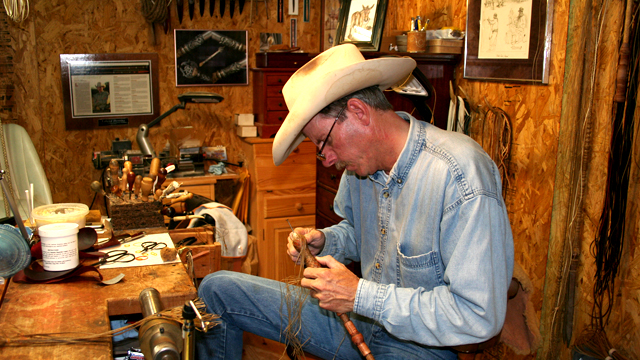 This article originally appeared in Eclectic Horseman Issue No. 82

Leland Hensley is driving across Oklahoma, bound for Kansas, when he answers my phone call. I’ve arranged to interview him about his craft, braiding rawhide. When I learn he’s behind the wheel, I offer to reschedule, but he declines. Having spent decades in his trade, the Meridian, Texas, craftsman is able to discuss any facet of braiding – sourcing raw material, hide preparation, tends in the business, even preserving utility in museum-grade pieces – while comfortably navigating the northbound lanes of I-35. It helps that each subtopic is rooted in one overarching guideline.

“Any of the things we talk about,” Hensley says, “will end up going back to the quality of the rawhide. That’s the first priority, whether I’m looking at a piece of equipment or braiding it.”

Defining “quality” rawhide, he adds, is all about feel. Braiders and horsemen talk about rawhide having the perhaps illogical attribute of “life.” In braiding circles, the term lacks a consistent, specific definition, but generally implies pliability. “You’ll know when you pick up a piece if the rawhide has life in it,” Hensley says. “You’ll just know it. Rawhide should simply feel good in your hand. It doesn’t matter if it’s new or if it’s been used for years. It should be soft and pliable.”

Horsemen with limited exposure to rawhide often deride it as a stiff material, but Hensley suspects such opinions are formed after handling poor-grade rawhide. Laymen might assume that a hide’s quality depends upon the animal from which it came. Even many braiders, Hensley says, insist on using hides from cattle of a particular breed, or use only hides from thin cows, deeming hides from fat cattle unusable. In reality, he asserts, there are no such hard-and-fast rules when it comes to a hide’s potential.

“I’ve had good rawhide out of all breeds of cattle,” Hensley says, “and from fat cows and thin cows.” Hensley acquires hides from a number of sources – ranches, vet clinics, packing houses, even butchers – and tries not to pass up opportunities to get his hands on viable material. “The other day, I was at the butcher and two nice-sized animals came in. No brands, good color. I didn’t need the hides, but I went ahead and asked for them.”

Hensley does avoid tannery-produced rawhide, which he says is ill-suited for braiding and is instead intended for products such as saddle trees, drum heads and dog toys.  “The braiding market is so small, it’s hard for tanneries to produce something specific to our needs,” he says. “It’s not to say tannery-sourced rawhide can’t be used for braiding. For a lot of braiders, it might be all they have available, but I’ve not found any tannery rawhide I like for braiding. The end result won’t be quality work, won’t feel good in your hand, might never break in, and won’t last. If you’re looking to create a nice piece that’ll last, and feel good for a long time, it just won’t work.”

When it comes to hide preparation, braiders employ a wide variety of methods to dry fresh hides, remove hair, and soften hides for cutting and braiding. (And, Hensley admits, every braider believes his or her approach is the wisest.) The make-or-break step, Hensley says, is the removal of hair from the hide. When a hide is destined to become using gear, Hensley will dry it and scrape off the hair. For more elegant work, he’ll treat the hide before removing hair; on small hides, he’ll apply a hardwood ash paste, and on larger hides, a lime-vinegar formula. “Both do a nice, clean job,” Hensley says, “but the key is not letting it set too long, which will weaken a hide and take the life out of it.”

A braider must put as much thought into a design concept to ensure a finished piece’s utility, a trait both craftsmen and horsemen would deem vital in quality work. Hensley says a braider might need to work backwards from an ambitious concept, critiquing the imagined end product’s potential weaknesses, then making design changes to ensure utility isn’t compromised. The process helps cull ideas that simply aren’t feasible.

“A braider might have an idea for a set of hobbles that would look cool,” Hensley explains, “but he might not have it figured out how to keep them within the parameters that preserve function.” Craftsmen who value functionality, he suggests, should shelve such concepts until inspiration hits. Too often, though, braiders give in to the temptation to use color or experimental designs to create a “wow factor” in their work, neglecting to think about how a finished piece will feel in a user’s hand or how it might fit a horse.

“A bosal’s nose button is a good example,” Hensley says. “A braider might make the nose button too long, nine inches or so. He can do a lot in that nine inches to make the bosal pretty and cool-looking, but that’s still too long for a nose button. And, just because a piece of rawhide equipment has color doesn’t make it better. Color attracts attention, but once you have someone’s attention, they need to see that everything else about the work is good, too. Consumers shouldn’t let their eyes deceive them, and makers shouldn’t throw color into a piece for no reason. With braiding and with decoration, there has to be a rhyme and a reason.”

In critiquing braided rawhide, Hensley says, consumers should first look for gaps in braids and knots. Such gaps allow moisture into the center of the piece, which can lead to the equipment rotting from the inside out. Refined work will have straight braids, symmetrical knots and consistent measurements.

Hensley warns, though, that even expertly prepared and braided rawhide can have limitations on its utility if it was a custom piece created for use on a specific horse or by a trainer who preferred rawhide equipment with unusual specs – longer-than-average reins, for instance. While the material and craftsmanship might be impeccable, utility might be compromised for a secondhand user. “I keep my work within a range,” Hensley says, “so if a piece ever changes hands, its new owner isn’t getting a ‘white elephant.’ That’s hard for braiders first starting out because making a living might require doing whatever the customer wants.”

Rawhide braiding, an ancient functional art form, is experiencing something of a resurgence. Hensley says interest among horsemen and among students hoping to learn the craft is higher than it’s been in decades. Aspiring makers have more educational opportunities available than perhaps at any time in history and, as a result, skill levels have risen. Still, the Texas craftsman says, work produced by contemporary braiders is only marginally better than that made by braiders from earlier generations. He attributes the lack of progression to braiders being in too great a hurry.

“Too many braiders will try to make the hide fit the project,” Hensley says. “You can’t force a hide to become something it’s not meant to be. And, I think braiders are too worried about what the work will look like. They don’t understand the fundamentals – maybe never learned them – and they jump straight to worrying about aesthetics. They jump ahead too fast, and they miss out on critical things. In a craft like braiding, you can’t replace time and experience.”

Even as one of North America’s most respected braiders, Hensley doesn’t exempt himself from his craft’s learning curve.

“These things are difficult,” he admits. “From hide prep through the braiding process, I’m constantly trying to learn and do better. There are always failures, but hopefully I learn from each one.”