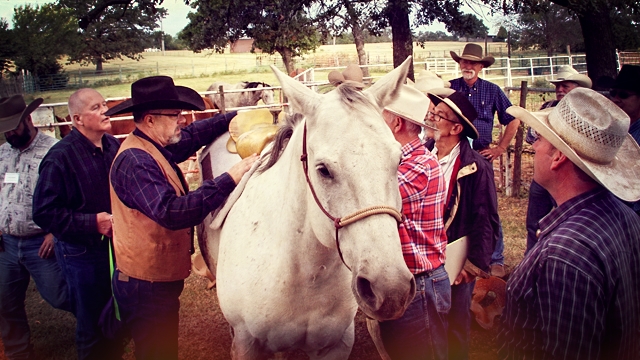 This article originally appeared in Eclectic Horseman Issue No.83

“Imagine you’re driving down the road and you see a beautiful car,” says Troy West. “You pull up beside it and it’s a Mercedes or a Lexus. The beautiful cars are always high-end, from makers whose designers take the time to really work on look. Even 20 or 50 years later, that look holds up.”

That concept, West asserts, also holds true when it comes to saddles: great work with an appealing, timeless look requires a meticulous design effort by the saddlemaker, and attention to detail that borders on obsessive. Such a design emphasis, he says, can make even the most understated saddle a work of functional art.

“Even a roughout saddle,” West says. “If it’s well-made, the stitching is immaculate, and the lines are superb, it’s a beautiful thing.”

A member of the Traditional Cowboy Arts Association since 2014, West has been a saddlemaker for nearly 40 years, and a treemaker for more than 15. Here, he outlines a few of the traits that can elevate a saddle’s design.

“Technically, a saddle doesn’t even need skirts,” West explains. “They do help stabilize the saddle, but they’re not strictly necessary, as weight is distributed through the bars of the saddle.”

A saddle’s skirts, though, present an opportunity for a maker to equip a saddle with eye appeal. At the back of the saddle, West says, the skirt should extend past the cantle (not the bars) a minimum of six inches, and no more than seven inches, for maximum visual impact. Many factory-made saddles, or handmade saddles from less-experienced makers, he adds, might have a skirt as short as the bar.

“Those saddles are never as handsome,” West says. “If you get those measurements right, though, you’ll simply have a saddle with more visual appeal. And, just like with a well-designed car, people might look at it and not even know why they like it. They just know they do.”

One of the most important saddle design concepts – great lines – is often lost on laymen. According to West, the notion of a saddle’s “lines” centers around symmetry, and the exact alignment of elements of the saddle, all of which contribute to proper fit and greater utility.

“When a maker is building a saddle, it needs to sit on his drawdown horse [on which a saddle is built] just as it would fit on a real horse,” West says. When a saddle’s position while under construction in the saddle shop differs from its position atop a horse’s back, he explains, both utility and design are compromised. “A lot of saddles, once they’re on horses, end up having skirts that run downhill from back to front. What that maker wants is a saddle on which the bottom line of the skirt is perfectly parallel to the ground, whether it’s on the drawdown horse or on a real horse.”

“When you achieve all this,” West says, “it makes for an attractive saddle, even to an untrained eye.”

In the past several years, West says, saddle buyers, as well as some manufacturers and custom makers, have developed a preference for 93-degree saddle trees, in the belief that such trees – in comparison to more traditional 90-degree trees – more closely match the angles of horses’ withers. TCAA founding member Chuck Stormes once explored the theory by making a 93-degree tree and testing it on a group of 50 horses, only to find that it didn’t fit any of the 50 as well as a 90-degree tree would’ve.

“A 90-degree tree simply has an angle that fits horses best,” West says. “It will fit the vast majority of horses with withers measuring at, above or below that 90-degree mark.”

West’s assertion was backed up at a 2014 workshop, taught by Stormes, at saddlemaker John Willemsma’s Guthrie, Oklahoma, shop. Saddle trees from various manufacturers and custom makers were on hand, as were 15 horses, with wither angles ranging from just under 90 degrees to 98 degrees.

“I put a 90-degree tree on the 98-degree horse, and it fit perfectly,” West says. “Horses have been bred to be more muscular, and trees have had to change to accommodate that, but it’s still an amazing dynamic that a 90-degree bar fits better than anything else.”

A recent trend in saddlemaking – especially with factory-made saddles – has been to widen gullets in an effort to lower the gullet height and give riders, particularly ropers, greater leverage. West agrees with the objective – better leverage – but not the approach to achieving it.

“You want to lower gullet height, but you shouldn’t widen the gullet spread,” he says. “The most effective saddle fit is achieved by having the tree fit high on the horse’s spine, where there’s less movement. The wider the gullet, the further the saddle will drop down a horse’s spine, putting it above soft tissue and in a position where there will be more movement.”

West offers the analogy of a person carrying a backpack: it’s possible to carry a backpack over one’s kidneys, but the load is borne more effectively and more comfortably on the shoulders.

He adds that the bars of a tree should offer even, surface-bearing contact. Uneven contact creates uneven pressure, leading to sore spots on a horse’s back, which will typically be most evident under the front end of a poorly fitting saddle.

“People say they like three-quarter rigs so their saddles fit further forward, but a tree is actually designed to fit one place on a horse’s back,” West says. “If you don’t know where that spot is, loosen your cinch and let your horse walk around a bit. That saddle will fall into that ‘sweet spot,’ like one spoon fitting against another.”

Despite such misconceptions, West points out advantages to flat-plate – seven-eighths or, more commonly, three-quarters – rigging: “It distributes pressure more evenly along the bars of the saddle so it has a more stable fit,” he says. “The further forward your rigging is, the more pressure there will be on the front bar pads, especially in D-rig saddles.”

Learn more about Troy West and saddlemaking at www.tcowboyarts.org. A.J. Mangum is the editor of Ranch & Reata. 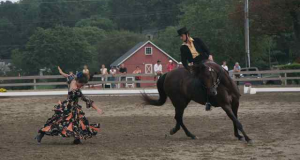 Interactive Arts Workshop – Association for the Promotion of the Art...