This past dark December month it became clear to me once again how horsemanship connects people, not only to horses, but to each other, turning strangers into friends. 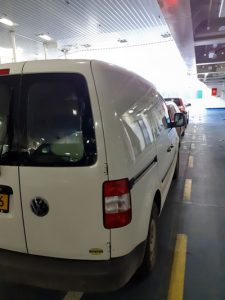 Early December I headed north for Estonia from the Netherlands. With my sister’s help, who endured many a Dave Stamey song on the days she and I took turns driving, and with my saddle in the back of a European Caddy Volkswagen (the closest I could find to a truck this side of the pond) I covered over 2500 kilometres and crossed 5 country borders in a couple of days. (According to European principles, this is quite a lot!) I’d been hired as a “natural young horse trainer” on a breeding farm in South Estonia, but had taken the job based on not much more than the exchange of a few emails and a hunch, as you do with any new venture, especially in the horse world – not having too much guarantee things will work out. Things didn’t work out. Too big a difference in opinions about “horse training” led me to pack up and hit the road again, a mere 10 days later. There I was, Christmas right around the corner, jobless, about to call off the whole adventure and turn around, tail between my legs. 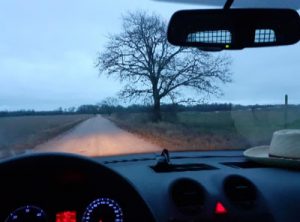 But there was a strange sense of empowerment in the act of quitting, a lesson and a new kind of confidence I hadn’t always felt much of before in my positions as a working student. The quitting actually had been liberating. For days before I had been pondering and looking for answers to questions that were difficult: do we, for the sake of having a job at all in the horse world, make compromises to the horsemanship? Do we accept to do things a certain way and adopt certain little habits that our employer likes and explains away as his or her own way of doing things, IF these habits contradict with the main horsemanship principles we worked so hard on to get even remotely skilled at? It’s not necessary to go into much detail here. What matters is this: making miles on the dark, winding roads of Estonia, where you can drive for hours without a car passing you by, and enveloped by vast woods and a sense of stillness you won’t find anywhere in western Europe, I found the answer: this horsemanship has to be about the horse, not about the people. It has to be about helping the horse to get a better deal, not about pleasing the people, whether they are owners or employers. The art, perhaps, lies in being successful in doing both. 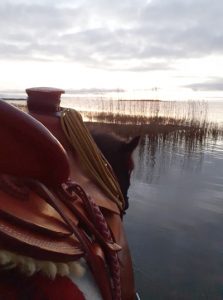 I didn’t have to turn around. Fortunately for me, I had a plan B to turn to: Amanda, my roommate at the Uh Oh Ranch in Colorado had introduced me to one of her mentors, Mirjam, who is originally from Estonia. I have never met Mirjam, but upon asking her advice, she gave me her aunt Epp’s phone number. Epp’s response was: come here! So I drove up to Varbla, on Estonia’s west coast. Upon arrival on her land, it was already dusk, she gave me a halter and a leadrope and said to go choose a pony: she owns 3 gorgeous little brave Estonian ponies: a yellow one, a brown one, and a black one. Within half an hour, we were riding down the beach, guided by a bright moon, and already chatting like we’d been friends for years.

I loved every minute at Epp’s. She put me up in her mother’s little cottage in the woods, told me to wait till after Christmas, till the new moon, to make any decisions whatsoever. Meanwhile she put me in touch with various horse folk in the country, told her border collies to make me feel at home, gave me ponies to ride, and fed me amazing beef and gingerbread cookies. I’ve not spent such a lovely, fun, heartwarming Christmas period in years. I met with various people and this week started a young horse job on Hiiumaa, one of Estonia’s biggest islands just off the Baltic coast. Currently there are more youngsters than I can handle, and I started working my first string of eight. 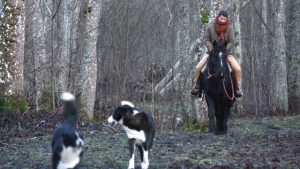 I found friends, mentors and support in places where I’d never been and in people I’d never met, but who became friends because we have the horsemanship in common. Since the start of my working studentships and chasing this knowledge I’ve been graciously hosted and helped along by people in the UK, Belgium, Ireland, the US, and now in Estonia. It keeps amazing me, and makes me feel wealthy beyond measure.

It also reminds me of something I once read that I think is attributed to Bill Dorrance: “You can’t buy horsemanship. You gotta be given it, shown it, you gotta receive it from someone who wants to give it to you. True horsemanship is passed down from one friend to another.”

Happy 2020 everyone. To a year of adventures and to friendships old and new. To learning from the horse.