A Sequel to “These Were The Vaqueros”

Preface
In the following pages, for the second time, the writer has made an attempt to give a factual account of the vaquero and buckeroo from a vaquero’s point of view.

Many books have been written on this subject and this book does not pretend to compete with them. Its aim is to present to the reader a simple account of the vaquero’s method of working and way of life, and the dangers and hardships he met in following a calling, which in spite of millions of words written in “Western” books, the public knows nothing about.

The writer has endeavored to keep the narratives of the vaquero’s experience short, without padding, in a conte form, so that they may be read without boredom.

The shortcomings of this book can be laid to the author’s lack of schooling, not to the vaquero or buckeroo, whose lives were of great interest; and until some great writer sees the promise for the author in the vaquero’s experiences, and writes them, the reader will have to bear with this writer’s poor efforts; but if the manner of telling is not all that could be desired, teh material can be relied on, for these stories were told from experience and observation, and in no case, second hand, the object of this writer being to set down facts.

In the following pates, I do not sound the depth of California’s Hispanic culture nor trace the currents of the Californian’s life, I can only scratch the surface of a righ heritage, becuase the old people are gone forever. I would leave the task fo an abler pen. I write only of thsoe men who rode horsess for the ride’s sake.

Be the first to review “Vaqueros and Buckeroos by A.R. Rojas – third edition” Cancel reply 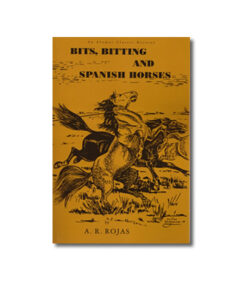