Scott manages Butte Creek Scout Ranch near Scotts Mills, Oregon, a ranch owned by the Boy Scouts of America (BSA) Cascade Pacific Counsel. Part of his duties each year include heading-up two large horse drives known descriptively as East Bound Horse Trek and West Bound Horse Trek. The horse treks are 180 mile horse drives where a group of 35 scouts help move 50 head of horses from the ranch to Camp Baldwin (a BSA camp) and back.

“We do this trip in June, and we do it in the end of August/first of September,” Scott says. “There are eight days on the trail, and the kids are with us for nine days—so they are spending nine days working with their horses. Most of them in this Boy Scout counsel have been around horses because we start putting these kids on horses and doing horse activities with them when they come to the camp that I manage as seven, eight, and nine year olds. It’s not a lot, but it is enough that they’ve become more confident and competent at horsemanship before they get to us [for the horse treks]. Many of them have been to Camp Baldwin and gotten their horsemanship merit badge.” 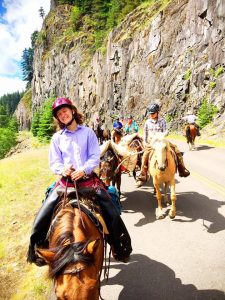 Scott’s predecessor began the horse treks around 1976. The Cascade Pacific Counsel has a long history with horses, keeping a herd for the scouts to use since before World War II. Scott has been running the treks since 1988. The ranch has 650 deeded acres, and with the land they lease the outfit is operating on about 4,200 acres which is used mainly for riding.

“Years ago now, we transformed the trip [East and West Horse Treks] from just going on a big trail ride to a natural horsemanship/personal growth trek,” Scott explains. “Nine days of living out there in the woods and having to have responsibility taking care of their own horses, learning about communication, about boundary setting, and leadership skills—going on a trip like that for a kid, we might say it’s a once in a lifetime experience. But what it really is is a life changing experience. It is such a cool deal because it is so far out of what these kids are typically doing. It puts them into a ‘wow’ mindset where everything sets different into them.”

A typical day on the Horse Trek trail begins at 5:00 a.m. 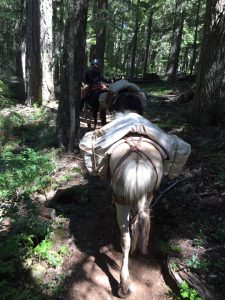 “We have a night watch crew that’s up all night long, watching over the horses and keeping hay in front of them,” Scott says. “That’s part of the experience for those kids. By 5:30, the horses have all got their grain buckets and are eating. By 5:45 breakfast is on. Some of those kids have never gotten up before light before, so it’s still dark and there’s a lot of new stuff to it. We make lunches in camp—we pack our lunches. We usually have four to six drag horses along to switch out if we have any problem with horses.”

Two pack horses also are used on the treks.

“A pack horse carries the safety gear, and then we have a lunch pack horse,” Scott says. “So, the kids get to learn a little bit about packing, balancing loads, and throwing different hitches. Right after breakfast some of the older kids will be getting those drag horses and pack horses together because that’s really what they’re responsible for. And when I say ‘older kid,’ it might be a kid that’s got three treks and is just 14.”

Each morning when the kids are ready and have their horses saddled, they meet at the “gettin’-on spot.” This rendezvous point also was the “gettin’-off spot” the previous evening. 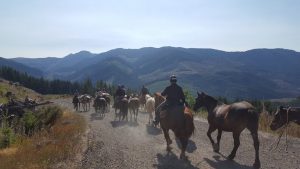 “It’s a big enough area that we can all be in this area and we can get a horsemanship class in,” Scott says. “Every morning we teach a groundwork class of some sort and we’ll teach a mounted class. And then we’ll expect them to work on those things during the day. And those mounted classes and those groundwork classes are associated with questions that we’ll ask about different life things—whether we’re teaching on balance that day, or goal setting, or whatever.”

“What are you doing in life to be balanced?” Scott says he might ask the kids. “What do you have to do to make sure that you’re not crashing? How are you staying on your horse in life? We work those in, and every day we’ll have a different theme. Our mission statement is that our goal is to build character in kids, and we do that through adversity. Anytime we can get rain, rain really helps build character. When you’re out for three or four days and nothing is dry anymore—you don’t have a dry pair of pants, you’re sleeping in a wet bed—you’re learning that you can endure what you don’t even think you could live through, you get some character built pretty quick. It’s pretty awesome.”

The days in the saddle on the trek trail range from 16 to 30 miles. 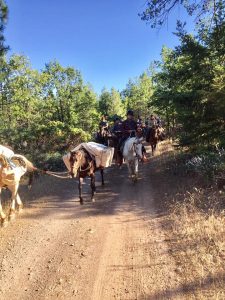 “We ride a route that goes through a lot of logging roads that have been decommissioned,” Scott says. “It goes up into the Pacific Crest Trail. We ride on the Oregon Trail for a day. We camp on the Oregon Trail, so we spend a whole day teaching on and highlighting the Oregon Trail. This trip crosses one of our major mountain ranges in Oregon [the Cascade Mountains]. One of the coolest things that people get to experience on this trip is seeing the change of the geology and the fauna. It’s continuously changing, changing as much as turning a page in a book sometimes. Every day is different for that stuff. We start at 800 feet [above sea level] and we go up to about 5,000 feet, and then we drop back down the other side, so that stuff is always changing.”

The Cascade Pacific Counsel’s herd is a mixed bag of mostly donated horses.

“These guys are an awesome band of backyard horses,” is how Scott puts it. “Over 10 percent of my herd are Mustangs. A pretty good majority of my herd are Quarter Horses. I’ve got Appaloosas; I’ve got Arabians; I’ve got Morgans…and a bunch of PMU horses.”

Teaching horsemanship is a major point of the horse treks, and Scott is serious about his horsemanship. 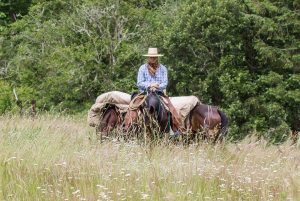 “I started as an 18 year old with Ray [Hunt],” he says, “so I got a good start in my horsemanship. And I ride in as many clinics as I can. I’m very progressive minded in my horsemanship—I want to be as good as I can be. I rode with Buck [Brannaman], Bryan [Neubert] comes out and goes to a barn that I manage, and I’ve ridden with Joe [Wolter] quite a few times. I try to get around to see just about every clinician I can see. All of their influence rubs off on me and I teach it to those kids.”

Horse Trek at its core is a job. Moving 50 head of horses 180 miles is essential to the operation of Camp Baldwin. That in itself can work as a lesson for many youngsters, according to Scott. 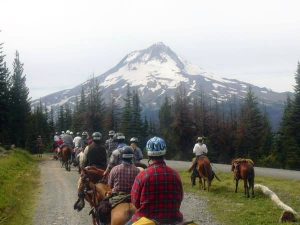 “One of the most unique parts about Horse Trek is that it is not a ride for entertainment,” Scott says. “It’s a ride with a purpose. So, we use that throughout the entire thing as a life lesson and use metaphors to teach about that. We tell those kids from the get-go that they are going to be responsible for their horses, all their own gear, and themselves—that basically they are hiring-on. This might be one of their first jobs, and that the job and goal of the trip is to deliver the Cascade Pacific Counsel’s horse herd to its destination safely. We build that up because we can talk about purpose and goal setting, those are two things we are constantly teaching during the trip. The end of the week the payment for that is a gold challenge coin that they get to take home with them.”

Even though Horse Trek is a job and the drive is not being undertaken strictly for entertainment, it doesn’t mean that there is not plenty of entertainment along the trail 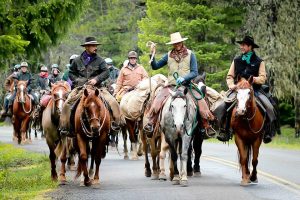 “We’ve got poets that are out there with us that have performed in front of thousands of people,” Scott says. “And we’ve also got pretty great cowboy style music out there. We spend a lot of time sitting around the campfire having that type of fellowship. I think right now we’re packing seven guitars with us because those kids leave and they go home and they learn how to play and they come back…‘Hey, can I bring my guitar this time?’ And we make a place for those guitars.”

Ultimately, not only are these Horse Treks great for growing kids up, but they also help the horses. Scott says that teaching solid horsemanship and keeping the scouts on point with practicing what they learn on the trail gets the horses into a good frame of mind. That helps the horses with their job of being Scout camp horses. Scott sums it up:

“This bunch of horses is immensely safe to be around.”