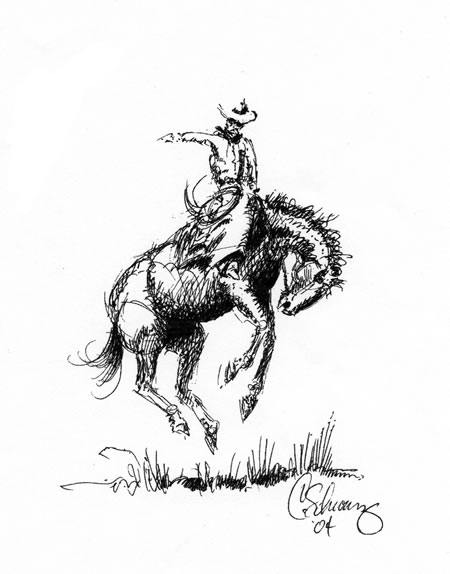 Bucking rolls have increased in popularity within the last few years, which has followed the increased demand for slick fork saddles. Questions arise as to their practicality, where and how they evolved and whether or not they are here to stay. Answers to these questions are not as satisfying as we might wish, but there are some interesting things that rise to the surface when one considers whether or not to use them.

Anytime a discussion of swell fork vs. slick fork saddles with bucking rolls comes up, the question arises “Why not ride a swell fork instead of having to purchase buck rolls as an accessory to riding a slick fork?” A reasonable question to be sure. In areas of the country where swell forks are used most, cowboys seem to be more utilitarian in their equipment. It has been said that “those buckaroos out there” have buck rolls on their saddles that are nothing more than an affectation. But as traditions go, the buckaroos in the Great Basin, the Northwest and in other pockets of the country are holding on tightly to a style that began over a hundred years ago.

Today’s buckaroos of the Great Basin region derive much of their equipment ideas from the California vaquero of old. This legacy emphasizes a high degree of pride in the way things look. Silver-mounted bits and spurs, braided rawhide and fancy saddles with buck rolls in the buckaroo country are all a testament to a high view of tradition. What the vaquero/buckaroo may give up in practicality, he makes up for in taste. In some quarters, bucking rolls are placed on slick fork saddles “because they belong there.”

This buckaroo culture with its inveterate ways appears to be leading the trend toward increased use of bucking rolls. Intertwined with the vaquero/buckaroo tradition are some individuals in the current crop of clinicians. As these clinicians elevate the level of quality horsemanship among their students, their influence on the type of gear used by their students is obvious as well; they have enlarged the sphere of influence of the vaquero ethic a great deal. Bucking rolls on slick fork saddles are a small part of this heritage, but it should be noted that they are a product of the buckaroo tradition and not a pure form descending from the vaquero tradition.

The beginnings of modern-day bucking rolls appear to have their start in the late 19th century in the Northwest. The earliest form was a tube-like construction that extended from one side of the saddle to the other just to the rear of the fork.

Some of these were actually built into the saddle and were not removable. The John Clark Saddlery of Portland, Oregon, is credited with the first patent on a removable buck roll that looks much like those of today. Virtually all the major saddleries of the day followed suit with their own version of the bucking roll. Clearly, there was a need to be filled, as many of the saddles of the late 19th and early 20th centuries were slick forks. A case could be made that bucking rolls served as a step in the evolution of the swell fork saddle, which became popular in the early 20th century. The bucking roll survives today, the popularity of an untold variety of swell forks notwithstanding.

Whether we use a swell fork or slick fork, we tend to develop the reasons why or why not to fit our paradigm and/or regional style. In the defense of bucking rolls, however, one could make a good case for the versatility they offer. They can be designed, made and positioned on a fork to the best advantage of the rider, usually with an eye toward closing up useable leg space. Most can be removed easily, therefore making the saddle more versatile. There is little chance of changing a swell fork front as easily or as substantially. Also, from a standpoint of comfort, buck rolls are softer than the wood of a swell fork tree.

Bill Kane, legendary horseman and former cowboss on the Spanish Ranch in northern Nevada, speaks of the “hook” that bucking rolls give the rider when mounted on a tough string of horses or riding in rough terrain. Certainly the security that they offer is a feature that many have come to rely on, and has enhanced their riding skills and their safety.

Bucking rolls offer a certain amount of security; a portion of that security may well be psychological. A number of respected horsemen and noted saddlers Dale Harwood and Chuck Stormes speak of good riding as primarily a function of proper balance. Ideally, we would “ride the horse and not the saddle” as they say. Good riding is more a result of honing our skills and less about equipment (like buck rolls) to get us where we need to be on the back of a horse. If this is the case, an overdependence on buck rolls (or swells for that matter) might be a step away from the ideal. Some accomplished riders seem to take pride in riding their saddle “slick” and speak of riding a variety of horses without the aid of bucking rolls. Better riders might be able to achieve balance riding a bare slick fork (or an English saddle for that matter), but the rest of us may struggle to find that kind of stability regardless of equipment.

There have been attempts to link the shape of the seat of the saddle (in saddlemaker’s parlance, the ground seat) with the style of fork. Slick fork proponents sometimes claim that the seat in a Wade saddle is the optimal shaped seat, implying that a swell fork cannot accomplish this ideal. This argument has been used to support the bucking roll/slick fork combination over the swell fork. This is a myth that had been perpetuated at all levels of expertise within our horsemanship circle. Truth is, the shape of the seat has little to do with the shape of the front of the saddle. A skilled saddlemaker can sculpt a ground seat that is nearly identical from one to the next regardless of the style of fork.

There is a wide range of theory regarding the use of bucking rolls: those that use them all the time swear by them; those that never use them say that they don’t need them. The middle ground has room for both and recognizes that there is a time and place to use them. Thus the Ray Hunt adage: If you need five pounds of pressure, use five pounds. No more, no less. Buck rolls can serve a purpose for some applications, but not all. In some cases, buck rolls may be the adornment that critics charge, but they are a part of a rich tradition that isn’t likely to disappear anytime soon. The use of bucking rolls, especially in some regions, is clearly a tradition with deep roots and choice that remains a highly personal one.

Most bucking rolls today are stuffed with wool trimmed from bark-tanned sheepskin with an occasional pair stuffed with horse hair. The shell is usually made out of chrome-tanned cowhide. This leather is what most soft leathers are: common, relatively inexpensive, but not a very rugged tannage. There are some bucking rolls available that are made of exotic leathers such as shark, elephant, stingray, ostrich and beaver tail, which offer a unique look and promise more durability.

Everyday cowboys expose bucking rolls to a lot of abuse. Nothing wears them out faster than inadvertently dallying up on one of them and/or packing the coiled rope across them. But as you notice wear on the side that the rope is carried on, removing and reversing the rolls will extend their life.

The style seen most often today is the strap-on type that is fitted into place on each side by the fork screws. A saddle string weight strip of leather then connects the rolls to one another. Some buck rolls are canvas lined, which adds a measure of durability and body. 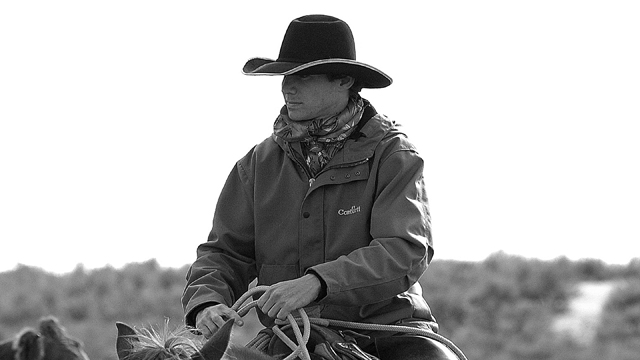