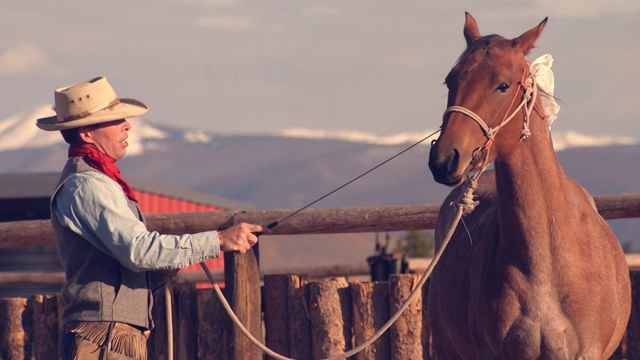 “He works with God’s horses across this great nation, aware of their strong sense of self-preservation. He knows nature’s language, and often he’ll mention, before asking favors, first get their attention.” – From “The Master” by Louis J. Schwiebert

So begins the poem titled “The Master,” in which is described many defining attributes of a master horseman. I’d say it holds true that any effective communication begins with having each other’s attention. However, when working with previously started horses, I often find that many are not in the habit of giving their attention to the human. I believe this is the cause of many difficulties that people experience with their horses. Being able to gain and hold the horse’s attention is a fundamental step in building a safe, workable relationship between the horse and human. I think every good horseman, at least subconsciously, makes sure they have their horse’s attention before attempting to elicit a response. Yet it’s a step I seldom hear expounded on during conversations of horsemanship. Perhaps for many it’s so basic and subtle a step that it is taken for granted, and so often overlooked in discussion. Considering the importance of it for good communication, and the trouble we can get into without it, I think it’s worth giving some thought.

Let’s think of any working partnership and imagine a task we’d like help in performing. It’s easy to see, that in order to expect our directions to be well followed, we will need to have our partner’s attention while we’re explaining the task. It would be difficult to expect good results if, as we are explaining what needs to be done, our partner had their head deep in the refrigerator intent on finding the makings for a sandwhich. Another analogy could be that of teaching a school lesson to a child. For instance, if we want to help the kid learn the meaning of a word, but he is currently staring out the window watching his friends on the playground, we had better regain his attention before giving the definition. It’s no different with horses.

Being able to draw their attention is the first thing I try to get when working with a horse. I achieve this by simply doing enough to warrant it. Let’s consider a horse turned loose in a round pen. He may be trotting the fence with his head over the top, concerned over the whereabouts of his buddies. I might slap my chaps, or kick up some dust, doing what is necessary to be enough of a concern that he takes notice for a moment. As the horse gives me his attention, I release, or stop doing whatever it was that drew it to me. As his attention leaves again, I start back with the distraction. It takes very few repetitions for the horse to associate focusing on me with the alleviation of distraction. The horse finds that his attention on me is more comfortable than away. He should start to consider staying with me, mentally to begin with, rather than leaving. In this manner, I can gain and then begin to hold his attention. If I am acutely aware of his attention and when it is about to leave me, I can be more and more subtle with my gestures.  A slight shift of my weight, or the small flick of my fingers, will soon suffice to bring him back to me.

When handling the horse, I want to warrant his attention so he’ll keep track of me, in order to respect my space. The horse knows where I am. I need to make sure that it matters to him. This time let’s imagine a horse that we are wanting to brush or saddle, again perhaps distracted by his surroundings. As I step in close to begin brushing, I’m going to make sure that I have his attention on me. I’ll check that his eye, or ear is towards me, indicating that so is his mind. As his head goes up and he looks off in the other direction to watch the happenings over there, I’m again going to do what it takes to bring his attention back to me. Perhaps I’ll bump with my elbow, or use a few taps with back of my hand this time.  It is when his attention leaves that we begin to loose influence over the situation. First it’s his mind, and then his head turned the opposite way. Then it’s his feet our way, and his ribs or hip knocking us right out of our tracks.  If I keep his attention with me, tipping his mind back towards me early and as often as necessary, I can avoid the undesirable results all together.

Being able to regain the horse’s attention is one of the few things I require before leaving a confined area. If I can gain his attention, and direct or disengage the hindquarters, I’m ready to head out. Then, as we’re riding out, if my horse becomes terribly concerned about some object, I can keep a controlling influence over the situation by directing him, either faced towards it until he’s satisfied it’s non-threatening, or away before it’s a big issue.  I would try to be aware of the same indicators, such as the ears and head, as well as noticing if his body tenses up, or he begins to gather himself under me, or drift in a certain direction, alerting me that his thoughts are going elsewhere. Before they are too far gone, I might tip his nose, just enough for a step or two out this way, thus redirecting his mind back to my ideas. Perhaps I‘ll pick up on the rein, asking for a slight flexion, simply checking in to ascertain that he’s still there with me. He needs to understand the aids for stepping his feet over, but I need to have his attention in order for the suggestion to be heard and so followed. He may savvy the cue in a more controlled environment well enough, but it is the habit that I’ve established of him listening when he hears me start to speak, (metaphorically speaking), that is going to keep him with me mentally, and so hopefully physically. Lacking this habit means his mind is free to wander, effectively tuning me out, allowing his concerns to take him where they may. This is where it can seem as if he is trying to take over, with little regard for our attempts to intervene.  This often culminates with the rider having to do so much physically to regain the horse’s attention, that when he finally does notice the action, it can scare him. Again, quite frequently, leading to negative results.

So, as I commonly discover, in order to get what we need from the horse, we must first give the same ourselves. In this case, we need be diligently aware of our horse’s attention, be steady at regaining it when it strays, and practice this habit until it becomes second nature and we can keep track of it while taking in our surroundings, or giving thought to other matters. Consistently giving our attention to the horse is the start of the horse consistently giving their attention to us. 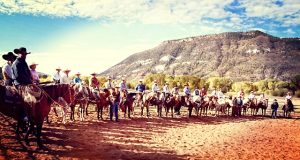