What began as an off-hand remark quickly snowballed into a full fledged, major league colt starting event—one which is now about to be held for the second time. On April 15-20, 2013, the California Mid-State Fairgrounds in Paso Robles, California again will be the home of the Horsemen’s Re-Union. (www.horsemensreunion.com )

“How it all came about last year was that we had too many horses to start,” says Cathie Twisselman—she and her husband, Rowly, own Madonna Inn Quarter Horses in California. “I was talking to Martin [Black] and Chris [Cox], I said, ‘Gosh, can’t we bring in a bunch of really good guys to start all these colts?’ just joking around. We had like 60, and that’s how it all started.”

Cathie, Rowly, Chris, and Martin produced the event. They decided to gather some of the world’s most notable clinicians, add in some experienced colt starters and ranch hands, and put on—not a competition—but a six day long colt starting demonstration. Then, at the end of the final day, the Twisslesmans put on a horse sale (produced by them separately from the event; they have put on a production horse sale each year since 1999). Many of the colts started in the event will be in the sale along with some older horses.

Another important aspect of the Horsemen’s Re-Union is that a portion of the profits go to benefit Western Wishes, a charity organization whose mission is to make the dreams of terminally ill children and young adults who love the western way of life come true. (www.westernwishes.org )

“This year will be the same as last,” says Martin, “The horsemen’s and producers’ rooms and meals were covered for the week. They were provided the option of a vendor booth-space, they could put personal items in the dinner auction, and two personal horses in the horse sale with all the proceeds going to them. Their time was all volunteered and there were no monetary winnings to them in starting the colts, the calf branding, or the goat roping. Most of the horsemen are coming back this year knowing that it’s the same thing, and we’re talking even about guys from Australia and overseas that are just excited about coming. This is kind of a volunteer deal, and we like to give the money we make to charity. People are coming for the atmosphere and the experience.”

In addition to all the above, the week also offers a variety of celebrated cowboy poets and singers performing during each day and evening. A range of vendors selling food and goods will be on hand. There also will be a chuck wagon cook off and many other special events scheduled into the festivities.

“There’s an auction,” Martin explains, “where the cowboys put some item in. It might be an old hat, might be chaps, might be a saddle or pair of spurs—something like that, some kind of memorabilia—and the proceeds from the individual items go to the individual cowboys. Last year that’s basically the only cash they got.”

There will be a variety of other fun events; a calf roping and goat roping, all designed to raise money and have a good time.

“The goat roping was really popular,” she says. “And funny! We have a lot more entertainment this year. We’re trying to figure out how to work everybody in because there are so many of them and they’re great! We’ve got Dave Stamey and J Parson back again.”

“The singers all called us and they’re eager to come, too,” Martin says. “Most of the musicians and poets are there all week so they’re going to be going through the day when there’s a slow time or providing some background music while we are riding. And then of course every evening we’ll be listening to them all week. A lot of this goes right back to the connection—Dave Stamey, Waddie Mitchell and J Parsons are ranchers, and Adrian [Buckaroogirl] is a ranch girl. So it all comes back to ranching and that’s what we’re trying to focus around.”

The list of colt starters for this year again is full of recognizable names. The international scope also has grown with cowboys coming from Australia, Canada, Israel, Mexico, Spain, and Switzerland to join those from here in the U.S.

“It’s six days of these great horsemen starting colts,” Cathie says. “Every day is a showing of the colts and also the horses that are in the horse sale because we’ve invited all the horsemen, the MCs, or anybody else involved in the production to be able to bring a horse to sell if they like. Those horses that anybody else is bringing have to be 4 years old or older. And we’re also going to put some older horses in there. These horses are all going to be shown and ridden around for everyone to watch for six days. Our theme is: 20 horsemen, 40 colts, and 6 days.”

The Horsemen’s Re-Union is an actual reunion for some of the hands starting the colts, but not for everyone there. The name signifies that the event is set up to be like those times on a ranch each year when a crew is put together temporarily for a big job, like gathering and branding or starting colts. It’s a reunion for old friends and neighbors, and a chance for newcomers to pitch in and help out. It’s also a time for sharing skills, stories, meals, and hopefully enjoying some camaraderie while getting a job done.

“The element of taking the competition out of the picture is everybody’s there to help each other,” Martin explains. “Everybody’s there to learn from each other. It’s more of an atmosphere of just a bunch of working cowboys working on the ranch. Even though they’re doing their individual thing, they’re working more as a crew to get their assigned horses worked.

“You can go to a colt competition and they can put the whammy on them, a little ram and jam for two or three days, and at most of the competitions the horses are exhausted at the end of the deal, and they can stand on their back and crack whips and run chainsaws and all that stuff, but it’s not because the horse is broke, necessarily. If you give him a week off and then go out there, he’s either going to have a lot more fire to him or they fried him so much that he’s never going to have any fire. If you’re going to maintain the middle part of the horse that we like, to get by for six days, it’s a different kind of horsemanship than you see in the competitions—and that’s the point of going six days—you’ve got to keep that mind fresh and working and you can’t just run them into the ground.”

This year, aside from the Twisselmans’ colts, two additional ranches have been invited and are bringing colts to be started. Both of these have won the ranch horse industry’s top prize: the American Quarter Horse Association [AQHA] Best Remuda Award—the Singleton Ranch based in Lamey, New Mexico just received that honor in 2012, and Babbit Ranches headquartered in Flagstaff, Arizona won it in 2005.

“We use all our horses here on the ranch,” Cathie says. “We live on a big ranch. We’re kind of in the rodeo and roping production business also. Plus, we all team rope and we use our horses on the ranch and we live on a huge ranch and we need them. We use them so it’s a good way to get them trained and ready for other people. What we’ve learned in having these horse sales is that the best thing to do is to get them to where anybody can ride them and do anything on them all the way from the beginner to the professional. That’s pretty hard to find when you go anywhere. You can go buy a show horse but that doesn’t mean anybody can ride him.”

Some of the colts getting started in the event will go back to the ranches they came from to work and some will be auctioned at the end of the final day of the event. The Re-Union proves to be a unique opportunity for the public to have a fence-rail look at the first week being put on a bunch of ranch colts by some of the most experienced hands around.

It’s not a typical clinic setting, Martin stresses. In many clinics or horse extravaganzas people get quite a bit of showmanship along with the horse work. While the Horsemen’s Re-Union is an event with plenty see, the horsemanship isn’t of the staged variety—it is more authentic to the real ranch scenario, and the participants have been carefully chosen to represent the more quiet and handy ways of horsemanship.

“Most of these guys are cowboys,” Martin says. “By the middle of the week you see the ropes down, you see them tracking cattle and roping cattle. A lot of people last year said, ‘Oh, that’s too early on them colts.’ Well, we do it all the time on the ranch. On the ranch we’ve got real jobs to do. That’s where a lot of these guys are coming from. Not that they’re in a hurry, but they’re not going to waste the opportunity to pull the rope down and go to roping something.” 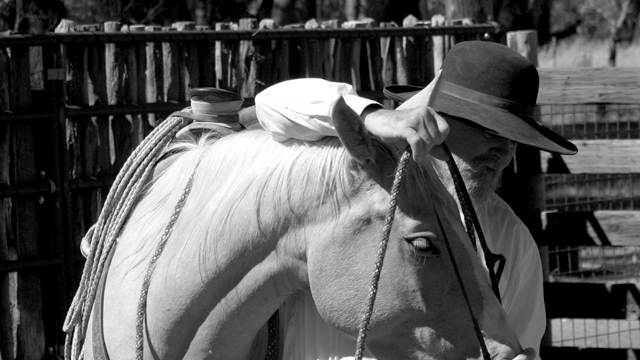