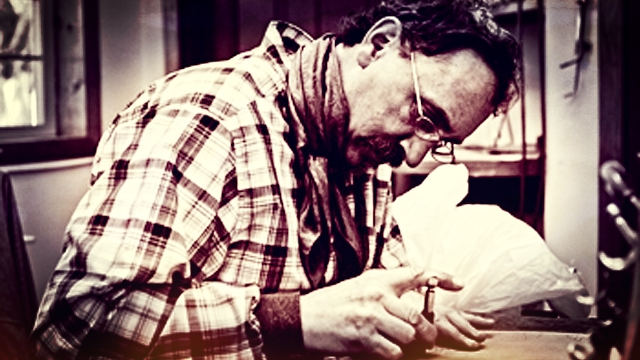 This article originally appeared in Eclectic Horseman Issue No.73

Rick Bean’s saddle shop occupies the center of the ground floor of the home he shares with his wife, Kristie, on a small farm outside Meridian, an agricultural community northwest of Boise, Idaho. A half-mile from the highway, with the serenity of the surrounding cropland broken only by the steady, gentle percussion of wheel line sprinklers, it is a place of solitude, a haven for creativity.

Inside, sketches of new saddle concepts, rendered on tracing paper, are stacked on the corner of a workstation, next to stamped leather and an endless variety of tools; a set of conchos await finishing touches; and a partially finished saddle is in the “blocking up” stage, in which adjustments will be made to ensure a saddle’s lines are correct before its decorative stamping is completed.

Rick, a member of the Traditional Cowboy Arts Association since 2005, is known for his elaborately carved “Sunday saddles,” working saddles with ornate decoration. On his saddle leather, Rick often depicts animals and human characters in detailed scenes that might be inspired by history, folklore or the contemporary West. An entire storyline can play out in the medium of a Rick Bean saddle.

“It’s an approach that I think adds enjoyment for a saddle buyer,” Rick says, “as opposed to regular floral carving.”

Rick’s fascination with leather work took hold when he was 12 years old, and received a Tandy leather kit as a present. Already an artist with a penchant for pencil drawings, he found equal creative satisfaction in the small projects that comprised the Tandy kit, and looked for more opportunities to experiment with leather work.

“It’s amazing the cards life deals you,” Rick says. “Our neighbors, the Pennys, were saddlemakers. They gave me some scrap leather, and I kept going back for more. They started showing me how they made saddles, and I was there so much that they put me to work sweeping floors. When I was 14, Gary Penny helped me build my first saddle.” From that moment, Rick says, his life’s ambition was clear.

On their Idaho ranch, the Bean family ran a cow-calf operation and a respected draft-horse breeding program that drew buyers from across the country. After graduating from high school, Rick earned his living making draft-horse harnesses; saddle orders trickled in, but initially accounted for only a small part of his business.

“The more saddles you get out there, though, the more people see your work,” he says. Eventually, Rick’s workload shifted, and saddlemaking became his primary vocation, with a steady enough demand that, in more than 30 years, he’s never been without standing orders.

A Rick Bean saddle often begins with a theme, an artistic mission that guides creative decisions. A 2012 saddle honoring the Great Plains trail drives of the 1870s featured period elements and sterling silver figures of Longhorn cattle. In 2011, Rick built a saddle as a tribute to Miles City’s cowtown heritage and the hallmarks of Montana saddlemaking; he gave the saddle oversized skirts and fenders once common to the Northern Rockies, and decorated the cantleback with a bronc-riding figure carved in leather. He gave a 2009 saddle, dubbed “The Outlaw,” a dark finish and decorated the cantleback with sterling silver figures of gun-toting badmen on horseback. In addition to the traits of its theme, each saddle bears intricate floral carving, achieved through countless swivel-knife cuts, another Rick Bean trademark.

Once Rick develops a theme, he makes a detailed drawing of the completed saddle he imagines, a step that allows him to settle on the saddle’s lines before cutting leather. He draws the saddle’s figures and floral pattern on tracing paper, giving himself templates to use during the leather-carving process. The drawings are, in themselves, fine art.

Next, Rick blocks up a saddle, assembling its undecorated, cut-to-fit components and trimming excess leather to ensure lines are correct. The blocked-up saddle is then disassembled so its pieces can be decorated with the patterns and figures he’s drawn. Rick places the translucent tracing paper atop the virgin leather, and uses a stylus to lightly imprint the pattern onto the material’s surface. He then sets aside the tracing paper and hand-cuts his pattern and figures into the leather.

“You’re not working with an eraser,” Rick says. “You make a cut and it’s a done deal. It can be nerve-wracking. The further I get into a project, the more anxiety I feel. One slip of the knife, and a project can be ruined.”

And while an abundance of freehand swivel-knife cuts are central to Rick’s style, he admits the approach, born from a boyhood fascination with such leather decoration, can be overwhelming, given its time-consuming nature and the sheer number of cuts his patterns can require.

Rick refines his cuts, then dyes his leather, often creating high contrast so that carved figures and silver decorations stand out, and dramatic effects can be achieved. The process requires a near-instinctual understanding of the ways in which different leather textures absorb dyes.

The saddle is then reassembled atop its tree and ground seat, and is cleaned and oiled. Finishing touches might include nothing more than a basic leather finisher. Rick avoids using acrylics and lacquers, considering their sticky nature inappropriate for saddle leather.

Rick completes between seven and 10 saddles a year, spending hundreds of hours designing, building and decorating each project. He estimates that each saddle he builds for TCAA’s annual show requires between 600 and 800 hours. Held at Oklahoma City’s National Cowboy & Western Heritage Museum, the TCAA exhibition showcases functional saddles, bits, spurs and rawhide that represent advancements in each craft and tests of their makers’ creative boundaries.

“I look at the other saddles I make each year as practice for my TCAA saddle,” Rick says. “When I’m sewing a cantle binding for a saddle few people will ever see, I put just as much effort into nailing it as I would for that TCAA saddle that everyone will study.”

Though he’s known as a saddlemaker, Rick also crafts the silver embellishments for his saddles, typically collaborating with silversmiths only for TCAA projects. He began working with silver in the late 1980s, after spending time with celebrated craftsman Elmer Miller, a mentor to many of today’s leading bit and spur makers.

“I wanted to ‘trick out’ my saddles,” Rick says, borrowing a hot-rodding term. “It’s been a challenge. Both saddlemaking and silversmithing take a lifetime to master, and mastering both is rarely, if ever, done. The goal is to make exquisite silver for use on exquisite saddles. The only way I know how to get there is to hunker down and get to it.” 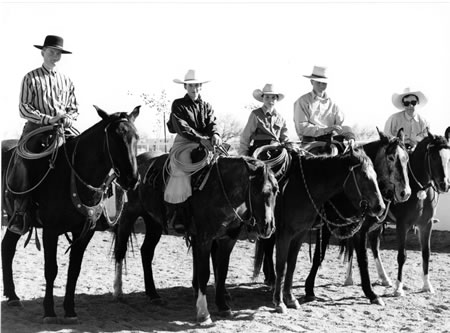