Celebrating 20 Years!
Free Eclectic Horseman gift subscription for new readers (no renewals) with any $25 purchase today only!
Put the gift sub in your cart and use coupon code oct20 at checkout ... A $40 value! Dismiss

François Robichon de la Guérinière (1688-1751) was a pupil of Antoine de Vendeuil, who was “Écuyer ordinaire de la grande ecurie” in Versailles between 1680 and 1717. In 1715, de la Guérinière received the title of “Écuyer du Roi,” which entitled him to give lessons. In 1730, Prince Charles of Lorraine, “Grand Écuyer de France” (Master of the Horse) named him director of the Royal Stables at the Tuileries, which had been founded by Antoine de Pluvinel, Louis XIII’s teacher. De Pluvinel is best known for his work: The Maneige Royal, 1626 [Xenophon Press 2010].

La Guérinière’s book, École de Cavalerie, was first published in 1731 and again under different titles between 1733 and 1802. This expanded edition contains all Chapters I – XXII of Part II of École de Cavalerie : The Method of Training Horses According to the Different Ways in Which They Will Be Used. Chapters XIX through XXII are new to this edition and contain valuable subjects: the war horse, the hunt horse, the coach horse and other matters such as tournaments, jousting, and carousels. The author reveals important training advice that will be invaluable to riders of many disciplines. The illustrations used are reproduced from the 1733 edition. Further expanding this edition is an Appendix including a new translation of Chapter VI from Part I: On the bridle.

École de Cavalerie is one of the best works on equitation ever to appear in France. In fact, it would not be an exaggeration to say that after a long struggle beginning in the renaissance academies of Italy, equitation in France suddenly flowed forth from La Guérinière. To quote the late Head of the Spanish Court Riding School in Vienna, Colonel Alois Podhajsky:

“It was the great riding master La Guérinière who produced the most revolutionary book on riding of all time. Unlike [those by] his predecessors, his book is clear and easy to understand. He based it on simplicity and facts, in order to be completely understood by his readers.” His principles are still “applied unaltered at the Spanish Court Riding School and may be seen there in daily use.” 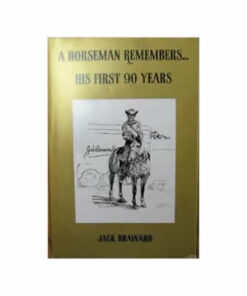 A Horseman Remembers His First 90 Years by Jack Brainard