When I meet someone for the first time I like to form my own impressions, based on my own sense of the person. I really try not to let any preconceived notions other people might have about them influence me. I want the chance to get to know them myself before I start forming opinions

Working with a horse for the first time isn’t much different. I try not to assume anything. People can tell you something about the horse’s history. Maybe he’s been abused or he bucks or they’re having some sort of problem getting along with him. That information is good to a point, but I try to let the horse tell me what his understanding is. He’s the one that has the most say in it and I want to work with him from where he’s at.

How does he feel about things? What’s he like at the end of the lead rope? Is there a heaviness or brace in there? Does he respond with respect, or is he just going through the motions? How the horse answers those sorts of questions tells me how he feels about things more than whatever the human might try to explain about him.

So I’ll check him out on the lead rope and use a flag to bring out a desire to move, which gives me an opportunity to see how much he respects and understand the lead rope. It gives me a chance to direct the feet. What I really care about is being able to control the hindquarters. If I can direct the hindquarters, then I can control them whether I’m on the ground or in the saddle.

It’s both a look and a feel I’m searching for. The look is what you see when he’s on his own, moving like it’s his idea. The feel is where it doesn’t weigh anything; all four feet are united and he’s mentally in the game with me. The flag and the lead rope are just tools that help me bring out the life and direct it.

In Starting Over – a video we just put out – I work with two young horses that were started before and then had nothing done with them for two years. They buck a little bit with the saddle in the beginning and the first impression might be that they weren’t started right originally. But it could be the horse is just uncomfortable. He’d rather not be wearing those clothes and he’s just expressing his discomfort with something he’s not used to having on.

To get comfortable or feel safe a horse will buck or run. Sometimes you have to allow them that and give them a chance to get comfortable. You’ve got to hang in there until they come around and find their comfort zone, or you might end up encouraging something you don’t want. So I make note of the bucking, but I don’t hold it against the horse and I don’t assume it means he wasn’t started right.

If a horse has been started before, and then not ridden for a while, he can forget he had once been okay wearing a saddle. Shoot, we all forget things. He’s probably spent more of his life not wearing clothes than wearing them. He just needs a chance to sort through it, but it usually doesn’t take as long for them to get comfortable the second time around.

A lot of times we hang on to those first impressions and don’t listen to what the horse is telling us. That can sure get you in trouble, making assumptions. So when I start working with a horse I’m unfamiliar with, like the two horses in the Starting Over video, I don’t think about the past. I’m just going to try to move on from wherever he’s at right then.

When he’s ready for me to get on, I’ll get on. Wherever he wants to go, that’s where I’ll ask him to go. It’s human nature to want to take control and go against that, but if I can get with him, then he can learn to get with me. And it’s hard to get to that point if you start out with too many preconceived notions.

Starting Over is available in the Mercantile.

If you enjoyed this article, subscribe to Eclectic Horseman Magazine. Learn More. 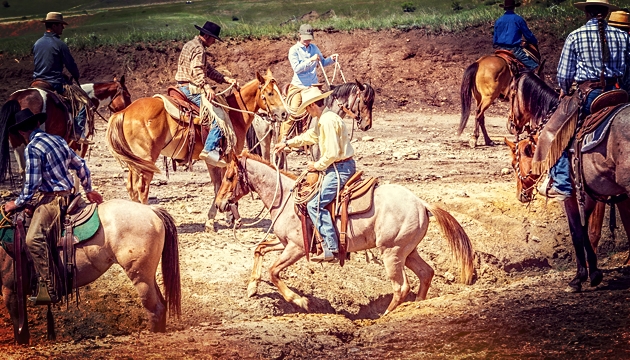