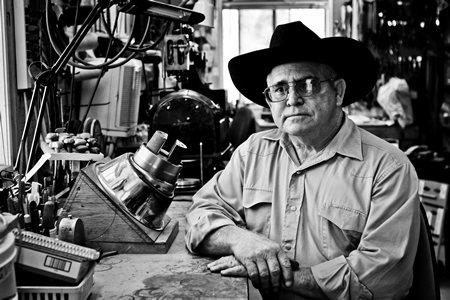 Bill Heisman’s bit and spur shop is on the edge of Saguaro National Park, a surreal forest of towering cacti outside Tucson. The road winds through saguaro-covered hills and enters a subdivision, where Bill’s home is situated along a quiet street. His shop, a compact building, is out back.

The shop’s interior is a tidy environment. Tools cover nearly every square inch of wall space. The gaps between machines form a path- way along the shop’s concrete floor. Despite the seemingly close quarters, there’s generous work- space on benches, and ample room to maneuver.

It’s fall in Arizona, and a cool breeze blows through an open window as Bill leans into a minor engraving job, a demonstration in the basics of inlaying silver. He’s placed in a vise a block to which a small, diamond-shaped piece of steel has been secured. Measuring with a set of calipers, Bill scribes on the surface of the steel the boundaries of the cavity he’ll create to hold a silver inlay. In keeping with his working style, in which power tools are rarely employed, he uses a chisel and mallet to shave metal from the area within his scribed boundaries, creating a pocket with a raised border of perhaps half a centimeter.

Bill files down the pocket’s rough edges, then uses an onglette to cut away the lower portions of the cavity walls, giving each a vertical angle akin to that of an A-frame’s interior Tucson, Arizona, bit and spur maker Bill Heisman. wall; when silver is fitted to the opening, it will be gently wedged into place, held tight by the pocket’s angled sides. Bill then “roughs up” the cavity’s surface, using a chisel to create a set of random upturned burrs that will help grip the soft underside of inlaid silver.

He next cuts a diamond-shaped piece of silver to fit the cavity he’s created. He files its edges to remove any rough spots and to achieve a better fit, then aneals the silver, heating it to red, then cooling it in water in order to soften it. Next, he places the silver atop the steel cavity and taps it into place, wedging it into the undercut channels he’s shaped along each wall.

Bill then runs a file across the work—steel and inlaid silver—giving the piece a level depth so that the transition between metals can’t be felt with a fingertip. With sandpaper, he removes his file marks. The work is finished, and the small piece of steel now has a bright field of inlaid silver, ready to be engraved.

The project is a morning’s distraction, nothing more than a means of illustrating a technique that can’t be summed up with a verbal explanation. The finished piece has no real pur- pose—Bill gives it to me as a souvenir—but, nonetheless, the work is clean, the silver properly shaped and perfectly fitted, its surface void of rough spots that could rip open a finger. Despite its simplicity and lack of a mission, though, the piece has a certain brand of perfection achieved only when a craftsman enjoys his creative process.

Born in 1951, Bill grew up working on ranches and competing in rodeo. He began working with leather at the age of eight and built his first saddle while still a teenager. Bill’s history as a spur maker dates back to the same era. He and his brother had built a homemade bucking machine out of a water heater, a Corvair transmission and a one-horsepower motor. Practicing their techniques aboard the invention, they bent their spurs against the body of the water heater. Bill fashioned heavy-duty spurs to withstand such rigors.

In the late 1970s, Bill opened a Portales, New Mexico, shop, where he sold his saddles, bits and spurs until the late 1980s, when he landed an opportunity to improve his work by studying bit and spur making with Elmer Miller, and gun engraving with John Barraclough at Trinidad Junior College in Colorado. By 1990, Bill’s California-style bits and spurs, bearing his now-signature large-pattern designs, were sought after by working cow- boys, competitive riders and collectors. In 1996, California’s Autry National Center of the American West purchased a set of Bill’s spurs for display. That same year, his work won the engraving award at Elko, Nevada’s annual National Cowboy Poetry Gathering. In 2001, the Academy of Western Artists named Bill its spur maker of the year.

Today, Bill, an emeritus member of the Traditional Cowboy Arts Association, no longer takes orders from customers, and has scaled back his workload. He continues to create work in the California tradition, though, and still prefers the larger patterns he says are truer to the region’s style for gear decoration. He uses powered tools sparingly, still working primarily by hand, and finds ongoing inspiration in the aesthetics of gun engraving.

Classic gun engraving employs a single-point technique to embellish open spaces on gunmetal. Creating one line at a time, artisans depict elabo- rate sporting and wildlife scenes often indicative of the region in which a gun is made or will be used. The craft, heavily dominated by British and continental European artisans, is defined by intricate, finely detailed scrolls and patterns. Despite its visual complexity, the work is often infused with an understated refinement.

“It’s an approach to design that’s dictated by the area that’s to be filled,” Bill says. “A craftsman has to ask himself what will make the spur look the best. Gun-engraving techniques offer an elegant way to finish an open space.”

Bill keeps, by his best estimate, a reference library of around 200 vol- umes—scholarly works on guns and gun decoration, as well as vintage tomes on bits and spurs. The collection frequently provides a launching point for a new piece. “You can look at some element in an older design and imagine ways of bringing it forward,” Bill says. “You say to yourself, ‘That would look nice if ….’ Everything’s been done at least once, but everything can be improved.”

That mindset, he adds, may be behind the current market’s blending of regional bit and spur styles. In a marked break with longstanding tradition, makers, horsemen and collectors have embraced designs that are hybrids of California and Texas genres, appreciative of the ways in which each style’s strengths can be implemented into a single piece. Not long ago, purists would’ve deemed the concept sacrilege. Such re-imaginings of convention in the cowboy crafts, Bill says, can excite even veteran artisans.

“It’s easily one of the best times to be a bit and spur maker,” he says. “There are more opportunities to learn, and more mentors willing to help than ever before. Makers, collectors and users are more educated, and that leads to better quality. There’s never been a better product than there is today.” 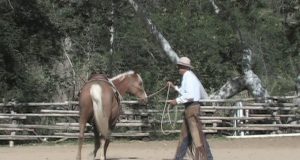