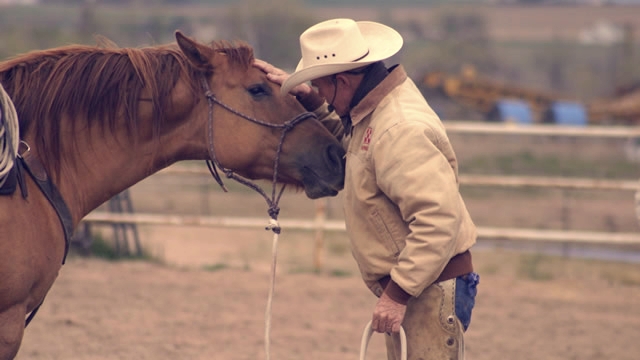 Let’s give a little thought (Ray would be proud) to a scenario that could happen; you’ve got ol’ Pete tied to your trailer, the fence, or, God forbid, a hitching rail. He’s good about being tied, and he’s good about being saddled so why not? Just strap it on him.

So you throw your wood up there, run the latigo through the cinch ring a couple of times, and just before you pull it snug, a paper sack blows out from under the trailer, or the dog some boarder brought to the farm and turned loose comes chasing the barn cat around the corner, right underneath your horse. That surprises or scares him right?

What’s the first thing a horse does when he’s surprised or scared? He throws his head up, and his feet start to move. When your surprised horse throws his head up, the halter grabs the top of his head and instantly becomes a mountain lion that’s just jumped on him. So, he sits back and strikes back at those two predators that have just attacked. When he sits back suddenly, this causes your not-quite-tight-yet saddle to turn off his side and under his belly, instantly becoming a bear that’s fixing to rip his guts out.

I’ll leave it to your imagination as to what happens in the next few minutes. I can think of a lot of things that could and probably will happen and they’re all bad.

Maybe, hopefully, he didn’t get on you or someone else when this wreck started, but I can assure you that everything I described happened in a couple seconds, and that was only the start.

When he finally quits thrashing around, now you’ve got to untie a scared, dangerous horse if the halter you had him tied with didn’t break. The halters most of you use broke, because they are made to look pretty and sell, not to hold a horse that has set back. The slip knot you had him tied with will not slip now that it’s tight. If it broke, this wreck has scattered through people, cars, fences, and maybe out on the highway.

I know there are a world of excuses for tying your horse up. Here are a couple;

It’s your responsiblility to teach him his responsibilities. If he moves while you’re saddling him, it’s likely due to one of two things. He either lacks a little confidence about what’s going on, or he hasn’t learned that it’s his job to stand still during the process.

If it’s a lack of confidence, he needs to be able to move his feet so that he can get this deal worked out in his mind that he is in no danger. He needs to feel that he can keep that sense of self-preservation. They all lack confidence to start with. My suggestion? You allow him to move. You just direct where he goes, the best you can. (Those reins are hooked to his feet! R.H.) When he finally stands still, look at what all he learned while he was learning to stand still.

If he just wanders off while you’re saddling, he’s not “with” you. He’s not trying to help you because he doesn’t think of you as being very important. He has some “horse stuff” he’d rather be doing, so he does it. You’re not the leader, you just happen to be in the vicinity.

(2) “I can’t keep up with the lead rope/reins while I put the blanket/saddle on him.”

It’s not his fault that you aren’t that handy. (In difficulty there is opportunity. R.H.) You want the horse, once saddled, to go with the prize, do a job, or go for a nice trouble-free trail ride, yet you aren’t handy enough (yet) to hold the lead rope while you put the saddle on. And you wonder why the horse has trouble once you’re mounted?

My suggestion? Tie your halter on the top rail of the fence and practice throwing your saddle up behind it. The fence won’t move or step on your foot while you practice. Do it from both sides.

I know a lot of you have been saddling this way for years, and grandma did too and we’ve all gotten along fine, and blah blah blah…. That’s fine.

As for me, I rarely saddle an older horse that is tied up, and I never saddle a young horse that’s tied up. I think too much of my horses. 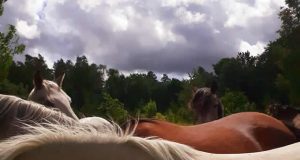