This article originally appeared in Eclectic Horseman Issue No.68

That’s your horse’s closest eye, or even more exactly, where the pupil can be seen on that eye. First about the pupil, and then about the why. If we look at the eye, we’ll see that the pupil and iris can be seen as the darker colored circle making up the majority of the visible eye. This is surrounded by the lighter sclera, sometimes referred to as the white of the eye. Obviously, the eye can move so that the pupil is in the anterior (or forward) portion, through the center, to the posterior area of the visible optical socket. If we are standing to one side of the horse, and we watch the eye, we can see when the pupil is back and towards us, or forward with the focus being to the other side, away from us. If we are mounted and the horse is flexed laterally even slightly, we can see the same thing. The pupil can be in the posterior portion of the eye, looking toward the inside of the bend, or in the anterior portion looking toward the outside.

If I am standing to one side of the horse presenting an object he is concerned about, such as my flag near his shoulder, the horse may start moving away from the flag. If we look at his eye now, we will most likely see the pupil towards the forward portion, looking away from us. He is trying to get away from the object. His mind is on leaving, his attention is on an escape route, and his eye is showing us this. When the horse looks in towards me (or the object), the pupil will shift towards the back of the eye. He has mentally quit trying to leave or escape and is at least considering a way to live with whatever I’m doing. It is indicative of a change in his thinking. That’s a start. I want to release for that.

With a horse that is pretty braced, and perhaps has quite a habit of shutting down, or just “wearing” any pressure, I might start with just standing beside him while his feet are still and begin lightly bumping him with a knuckle or the handle end of my flag, watching for the eye to move, and the pupil to come back towards me. Sometimes the horse may bend his neck and head around. If the eye comes with this, great, but I’ve found quite often the eye moves first by itself. Other times, especially with a horse that has been bended a lot, the head and neck may come way around to the side, to where the stirrup is if he’s saddled, but the pupil can be deep in the anterior corner of the optical socket, straining to keep sight of the opposite direction. That is not very useful to me. He is giving physically, but not turning loose mentally.

If the horse is moving, as when we ask him to walk a circle around us from the ground, he may be leaning in, perhaps with the back of his jaw being closest to us, or leading with his shoulder. His head and neck may be bent towards us in a fashion, his feet may be getting him around us, but if his pupil is away, his mind is on leaving, and his poll will be flexed to go the opposite direction. If we analyze the feet closely in this situation I think we will often find that they are not reaching evenly with all four, but instead he goes straight forward for a stride or two, and then the front end comes in towards us. The inside hind foot is probably stepping straight ahead rather than up and under the center of the body. That does not make for a nice circle. The horse can do this and still be very braced, and if we increase speed it rapidly falls apart. Sometimes, he may be giving his feet to an extent, (and that may be where we have to start), but the horse can give his feet, and his mind not be there. He’s just going through the motions, so to speak, waiting for us to quit. That’s not the partnership I’m striving for.

When the mind comes, I find the poll and the loin come, and so does the rest of the body and the feet. If the horse is there mentally, he physically prepares for the direction suggested and so shapes or rounds from the nose to the tail. I find the physical indication often begins with the eye, and that a change there usually just precedes changes elsewhere. It’s the best indicator, for me, of where the mind is. If I get this, the horse will take care of the rest of the body.

I can keep track of the feet, I can be aware of the bend, I can feel the whole horse, but especially in these instances, I am going to pay particular attention to the eye, to see when his mind is tipping towards me, or towards the direction I’m offering.

Again, we can start by recognizing and releasing for the first indication of a try, and then encourage that response, thus developing the mental aspect of trying into a habit for the horse.

This article originally appeared in Eclectic Horseman Issue No.68 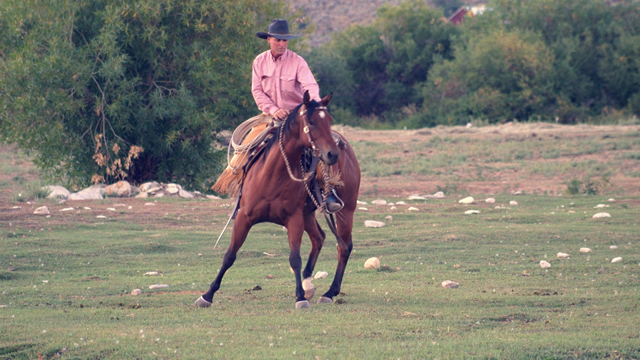