Story and photos by Emily Kitching,

This article originally appeared in Eclectic Horseman Issue No.2

The analogy of the dance is one that is commonly used to describe the movement in partnership and rhythm between horse and rider.

It is an ideal that is worth trying to achieve because it connotes beauty, good timing and a willingness between two individuals. Someday we may be there with our horses, but for many of us, both horse and rider are in des- perate need of dance lessons.

The following exercise is a good place to start your dance education. You will be disengaging the hindquarters and bringing the front quarters across while traveling on a path around an arena or up and down a fenceline out in a pasture. Many of you will have already done some preliminary work on the ground which will have set a foundation for moving all four quarters of your horse and shifting his weight forward and back. (Please see Getting Off On the Right Foot, EH issue #1).

Now we will take those same principles and apply them to the horse under saddle through an exercise demonstrated by Buck Brannaman at his clinic in Fort Collins, Colorado, earlier this year.

“This is a real fundamental exercise that you would do with greener horses. You are using the movement of the hindquarters to prepare the horse so that the move he is most likely to make is to bring his front quarters through and square up his body.

“Later on in his education you would just be able to ask the front end to come through without disengaging the hindquarters first. But to start, by bringing the hind through then stepping the front across, it will help your horse to be more lively when he moves his front end,” says Buck.

As Buck demonstrates this exercise on Tuba, pay close attention to his rein, leg and body position. In order for you to be successful with this exer- cise, you will need to be consistent in how you ask for your horse to move through your use of your body.

“To start, say I am heading to the left of the arena, I will take my horse’s head to the left and step his hindquarters to the right until he has traveled 180 degrees. Then I will open up with my left rein, support with my right rein and lead his front quarters to the left for another 180 degrees. We will end up facing the same direction that we were when we started, having trav- eled in a full circle.

“You will not stop during this maneuver. You might be tempted to stop between moving the hind and the front, but don’t. Keep the energy flowing through. At first you might feel really awkward and clumsy. In the beginning the hind might not have stepped through as clear as you would like by the time you have traveled 180 degrees, but keep going and just go ahead and bring the front across when you’ve traveled the appropriate distance. When you are working on this, it will get better and then it might get worse but eventually it will be consistently feeling good.

“This should get to be really smooth, so it’s really just a nice little dance step that you and your horse have worked out together. If you just have a basic idea, through repetition he’ll get it.”

Dance to the Left 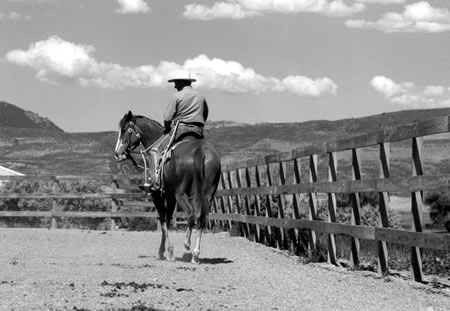 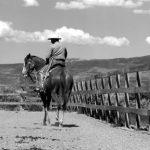 1. Travel around the arena to your left. This means that your left side should be to the inside of the arena. Walk your horse forward, with life. You will position yourself about five or so feet from the fence so that you give yourself and your horse room to work. Imagine a line out in front of you; this is the line that you will be moving off of and returning to throughout the exercise. 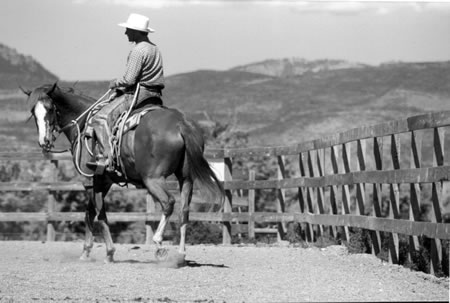 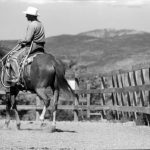 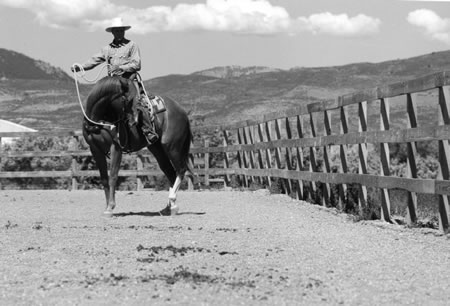 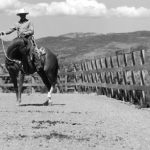 3. You will step the hindquarters over until you have traveled 180 degrees so that you are facing in the opposite direction as when you started. When asking for the hindquarters, here with the left hand, you should have a straight line from your hand to your horse’s ear. Note that Buck’s right hand is not active at all. 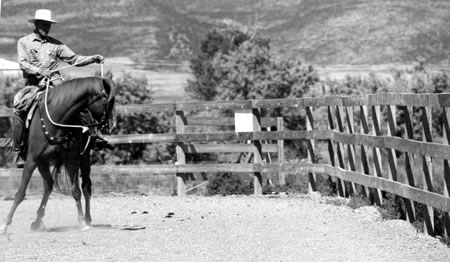 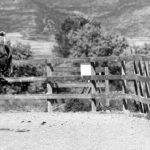 5. Now Buck has opened his left rein, leading the front quarters through to the left. You can see that his right leg supports his reins and that Tuba’s weight is now rocked back onto his hindquarters so that his front quarters can move more freely. 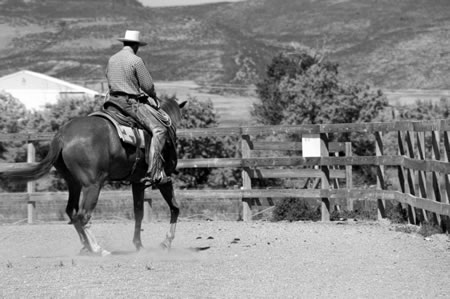 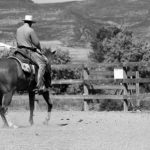 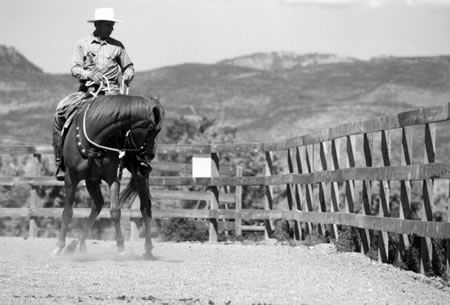 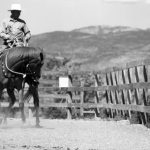 6. Buck will continue to lead the front quarters to the left until he has traveled another 180 degrees. When he is facing the same direction as he was when he started, he will release and walk Tuba forward.

Dance to the Right 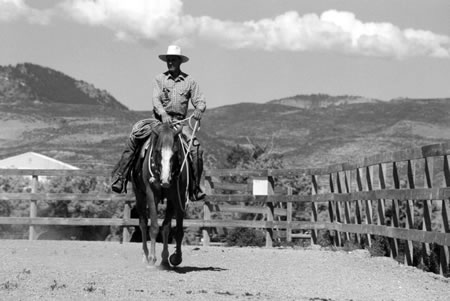 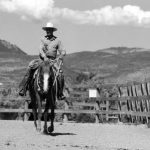 1. Buck starts by walking Tuba forward and to the right of the arena. Note that the coil of the mecate is in his left hand so that he is already in the position to ask for the hindquarters. When he is ready, he will draw the rein with his left hand, through his right hand, so that the right rein gets shorter without him having to reach way down and put his body out of position. 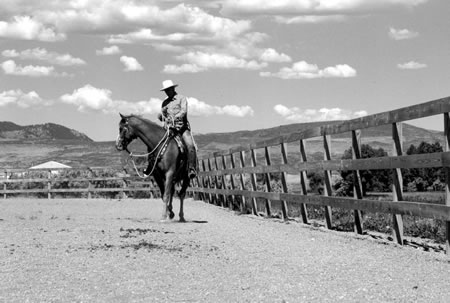 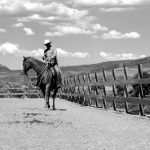 2.Having shortened the right rein, Buck draws Tuba’s head around to the right and applies his right leg, asking the hindquarters to step to the left. You can see that Buck’s hand is in line with Tuba’s right ear. If he did not take the rein short enough, Tuba would end up walking in a small circle without disengaging his hindquarters. 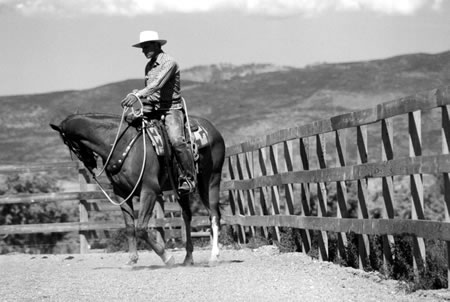 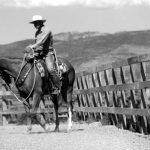 3. Buck will continue to ask the hindquarters to step to the left until Tuba has traveled 180 degrees. Note that Buck’s left hand remains inactive as does his left leg while he is asking for the hindquarters. 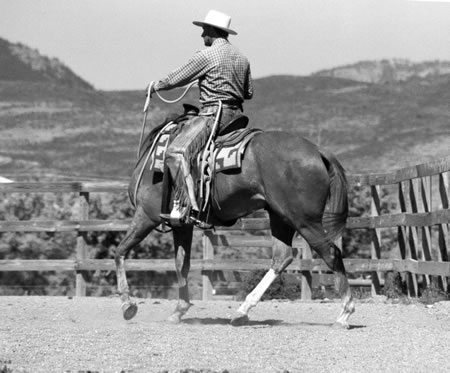 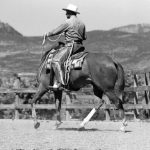 4. Here you can really see the hindquarters swinging under and over, and the position of the left rein while Buck waits for Tuba to complete the 180-degree turn. His right leg is still active and his right rein will keep Tuba’s head and neck in position. 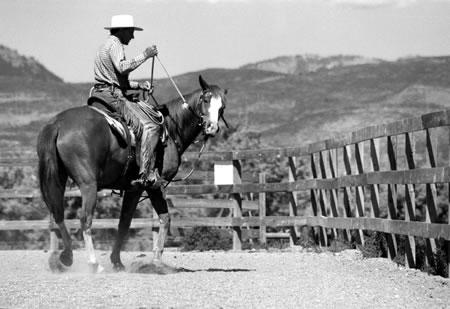 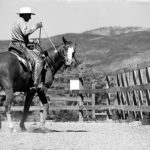 5. Having passed the 180-degree point with the hindquarters, Buck opens up his right rein and brings the front quarters to the right. You can see here that Buck is having to draw a little up and back to encourage Tuba’s weight to get back over his hindquarters. He is starting to step with the front, but the weight isn’t back far enough. 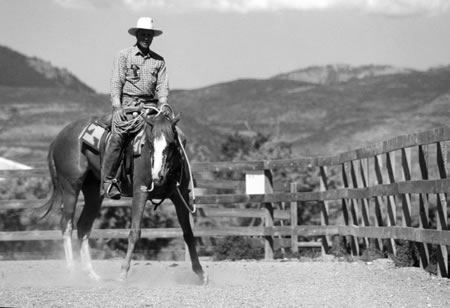 6. Once Tuba has traveled 180 degrees with the front, Buck will release the rein and his left leg, and allow Tuba to travel straight forward in the same direction that he was traveling when they started.

This article originally appeared in Eclectic Horseman Issue No.2