On June 5, 2015, the first annual Invitational Colt Start took place at the Houlihan Ranch in Sheridan, Wyo. In case you missed it in the past, mark your calendar for this year’s event scheduled for June 2-5, 2022. If you are interested in starting colts or helping an older horse that is troubled, this is an event you will not want to miss. (Email Reata for spectator details.)

Twenty riders from across the United States were hand -picked by Buck Brannaman, and his daughter Reata, to participate in last year’s five-day event. Reata says, “The clinic is put together to be an ‘at home’ experience where we (the Brannamans) can show people how we like to start our colts and get them going and give them the best start we possibly can. With a great group of hands, we have the opportunity to give 25 colts the best start they can get.”

The majority of the riders who were chosen to participate make their living on horseback utilizing the methods that Buck has passed on to them. This event provides great mentorship for both the riders and the spectators, and it provided plenty of personal time to take notes and ask Buck questions. For the riders and horses it was a rare opportunity to work all day under Buck’s watchful eye. Each year Buck offers numerous colt-starting clinics across the country, but what separated this particular clinic from all the others is the fact that it was held at the Brannamans’ personal ranch in beautiful Wyoming.

Buck and Reata selected which colts would participate in the exclusive clinic. For the most part, they had all been handled properly from the day they were born, which allowed for a greater amount of material to be covered in the five-day clinic, since there was no regressive work which needed to be corrected. The colts in the clinic made up a pretty diverse group. Lance Froelich at Froelich Quarter Horses out of North Dakota bred many of the colts in attendance, and several of the other colts were privately owned.

The clinic stretched from 9:00 until 4:30 every day, which meant that the colts had plenty of time to learn, and were not rushed into anything. From time to time you could even see a few of the colts lie down with their saddles on while the other riders would set them loose to help a fellow horseman. Each morning the class would begin with haltering, groundwork, rope work, saddling, and exposing the horses to moving their hindquarters and front until the balance was correct. Through these precise movements they became less troubled. Buck pointed out that this preparation was vital to the success of the first ride. The riders were encouraged to work on developing “feel”; that the horse shouldn’t weigh anything on the end of the lead rope. He reminded everyone that a horse would resist you if your timing is poor and you throw off their balance. Buck referenced Bill Dorrance when he explained, “You feel of the horse, you feel for the horse and then you both feel together.”

As the days went by, the colts began to weigh less on the end of the lead rope and both the riders and the spectators could see that given the opportunity to search, these colts were learning what “feel” is all about. If you have watched Buck start a colt, you know how he makes it look like an effortless dance. When a young horse is presented with movement that is timed up precisely with the timing of their feet, they feel supported. If the timing is poor it is similar to being tripped; you teach them to brace up and be stiff instead of soft. The audience was able to witness each horseman constantly trying to perfect their “feel.” It was up to the riders to not screw that up, but to give their best so the colts had many positive experiences. No pressure!

The entire class was encouraged to not “get in a hurry,” and the colts progressed quickly because everyone was very thoughtful and thorough. If they were unsure of things, it was important to get them confident. Buck reminded the riders that when it came to starting young horses, we should work with these colts until we were confident that it would carry over, and then throw them out for a couple of months to grow up. He explained, “When you then bring them back in, even if you know what you’ve done has carried over, you still need to restart them and go through everything.” These were words that all the riders had heard many times over the years, but the constant reminders are always reassuring and inspiring.

Many of the colts had not had their feet handled much, so there was ample rope work to really help them learn to turn loose. Since a horse’s natural instinct is to flee when scared, by handling their feet with the rope you can teach the horse to give into the pressure of the rope instead of trigger that instinct to escape. Buck emphasized how he likes to perform this exercise without gloves so that he doesn’t pull too hard. The softer the handler can be with their feel, the better the handler is able to prevent the horse from fighting. Learning to let go of tension and timing the release of the rope pressure when the horse gives, allows the horse to get better at yielding their foot to the pressure, rather than fighting against it. This prepares the horses for many real-world situations including working with the farrier or helping them remain calm in any situation where they may get their feet trapped in wire, for instance, in which case attempting to escape could cause much more harm than being relaxed and less anxious. 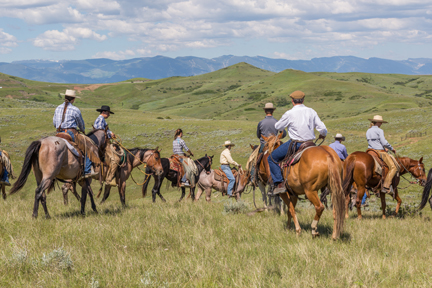 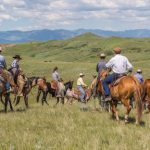 Colts out on the Brannaman Ranch. Photo by Nicole Poyo. 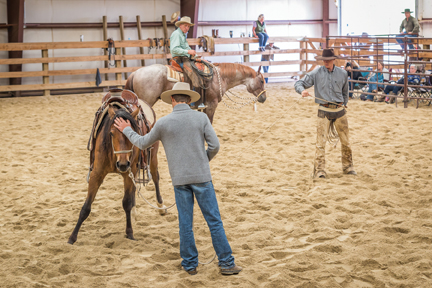 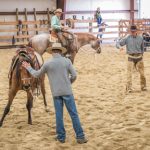 Noah Cornish and Issac Johnson get the colt better about its feet being handled. Photo by Nicole Poyo. 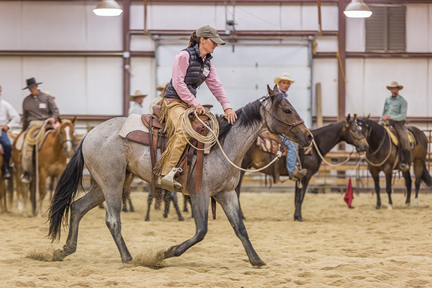 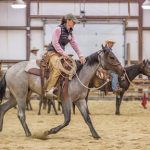 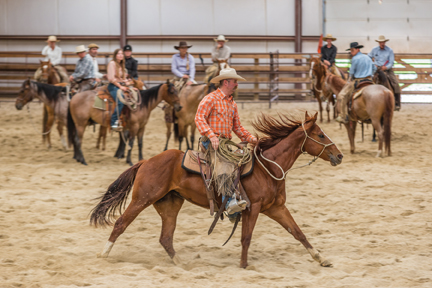 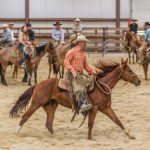 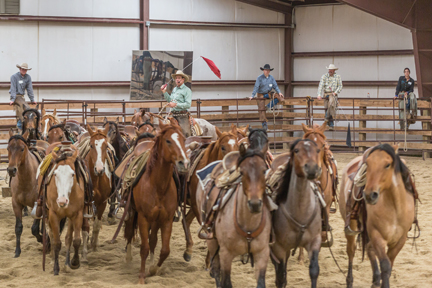 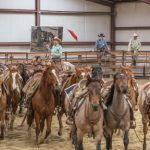 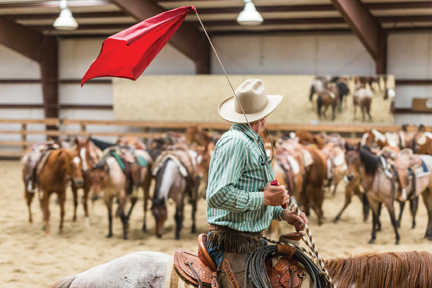 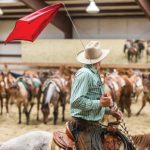 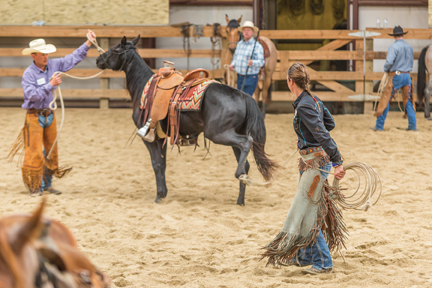 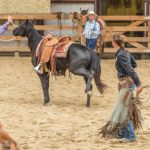 Working with a rope. Photo by Nicole Poyo. 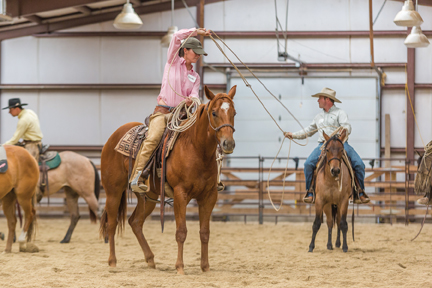 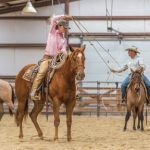 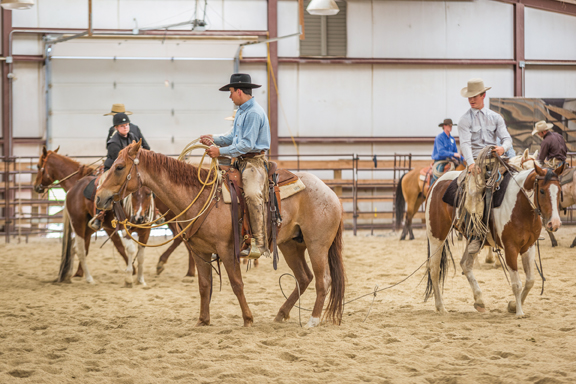 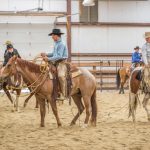 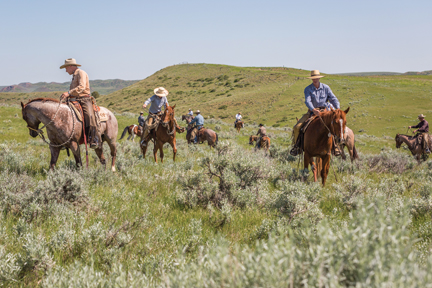 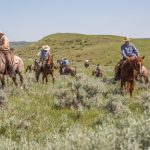 Riding the colts out on the Brannaman Ranch. Photo by Nicole Poyo. 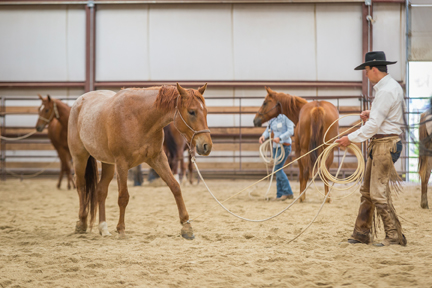 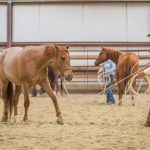 Leading by a front foot. Photo by Nicole Poyo.

As the clinic progressed the riders were able to expose their horses to the feeling of being guided from their back. The precise groundwork set everyone up for a successful first ride, demonstrating that colt starts do not need to be about a lot of theatrical bucking and kicking up dust. You could sense that the colts were beginning to understand and absorb the lessons proving that hard work, consistency, and good timing pay big dividends in starting colts. The colts were unsaddled after a short ride and put up during the lunch break. After the break, they got the opportunity to be re-saddled and checked out again to see if there was any trouble. With each saddling and unsaddling the colts gained valuable experience and increased confidence.

Since this group of riders were relatively experienced at colt starting, it allowed Buck to teach his invitational colt class a little differently. A couple colts were pretty herd bound, and since everyone was pretty comfortable moving out we started with the herd-bound exercise; sort of like a divorce ceremony. Without touching the halter rope, the riders had to move their colts out one at a time until they stopped at the other end of the arena. This ended up being a great way to get them moving out in the trot and canter for the first time under saddle. Getting a horse’s mind refocused on the human is extremely important, so it was up to the rider on the first ride to show their horse that being with them was better than being with the herd. The spectators could witness the importance of the riders being balanced and confident while riding forward without pulling against the colts. Some colts found the “sweet spot” a little sooner than others, but each day the riders would revisit this exercise and the colts found the spot with increasing ease. As the riders looked away from the herd and rode off, the colt would look to where the rider was looking and they would walk, trot or canter out and then come back to a stop in unison as the rider stopped riding.

The colts had time to absorb what they had learned during the day in a focused but relaxed atmosphere, and they were then turned out on the grassy hills each night. It was a beautiful sight to see the herd being set free to just be horses at the end of the day. Each morning Reata Brannaman and Isaac Johnson would ride out to gather the colts and bring them down to the pens. For a few of the colts, this was a new experience to roam on wide-open territory. A few colts had never had the opportunity to grow up in a herd and this simple act of being turned out taught them many lessons that will last them a lifetime.

Brooke Sene of Bozeman, MT was one of the riders who participated in last year’s invitational clinic. Brooke remarked, “How humbling and amazing it is to see how much these colts can learn and do in such a short amount of time with some experienced riders and the guidance of Buck. After witnessing how peaceful and harmonious starting these colts was, it almost makes my heart hurt a little for the colts that don’t get this kind of start. It doesn’t matter what discipline you ride, you and your horse can benefit from these theories and methods. Starting young horses doesn’t have to be a wild bronc ride where the colt and the rider end up scared and troubled. In fact, it can and should be the exact opposite. I am so happy that Buck continues to share his knowledge and this method of handling horses. Maybe one day every horse will get to experience a thoughtful rider from the beginning.”

If you get the opportunity to come out and watch this event you will not be disappointed. Both the quality of horsemanship and the opportunity to watch Buck ride some of his own horses at his home is an unforgettable experience. After making the trip from Tennessee, one spectator said, “You can’t duplicate this setting and the relaxed atmosphere. Asking Buck questions as the riders brought their horses along gave us the perfect chance to learn how to give colts a quality beginning, as well as improve our own horsemanship.” The group of folks observing were busy taking notes and soaking up Buck’s wisdom in a fun environment! Watching fellow horsemen continue to educate themselves and push to learn more about their trade is truly inspiring. I hope you can make the trip to attend this incredible event. Spectators are all welcome to event at $30 per day. More details at brannaman.com.