Many times we find that horses have a side that they are comfortable with us on and a side that they would rather not have us. For many of us, knowing how to address this can be a difficult challenge. And, knowing that the horse is most likely imbalanced because he is unsure, addressing this issue without making him more unsure can be an even greater challenge.

In the following sequence of photos, Bryan Neubert demonstrates one way in which he might make the thing he would like the horse to do comfortable, while making the behavior that the horse would rather do, uncomfortable.

This particular colt was pretty tight and unsure of a lot of things in general. You might recognize him from “Catching Up on Rope Exposure,” EH #25.

During the morning of the clinic leading up to this point, Bryan has noticed that this horse has been very resistant about looking at his owner out of his right eye. Bryan observed his owner struggling with how to change what had become a pattern of behavior. Bryan demonstrates the following way of approaching this issue so that instead of the horse feeling as if this were some problem you were working on, he instead learns that he has a choice. The horse finds what he thought was more comfortable is not, and discovers for himself that he can be comfortable looking out of his other eye.

“The objective in this situation is for this horse to become more comfortable with my presence and contact on his right side by arranging it so that it becomes his idea,” says Bryan.

“This exercise is one of several things we did with this horse to make his first ride uneventful and to build a foundation to balance both sides—something necessary in all that he will do. Since we saddle and bridle and catch on the left, we could have avoided this issue. However, when his rider’s leg slipped over the saddle for the first time, or the first time he turned right with a rider, he would tighten up and might bolt or buck, not a good first ride for horse or rider.

“I wanted this horse to find out that he did not need to defend himself. This is another one of those little things that can make a big difference, because in this case, I’m also changing his perception of me so he can let his guard down and be more trusting.

“This horse was defensive enough that I thought he might strike. So I adjusted my position off to his left side more than I might with another horse. Remember, a horse can kick around a corner, but can only strike in front of himself. You would be working on this project with a defensive horse, so don’t take for granted that he won’t defend himself with his feet.

“In another situation I might have started standing on his right side, his neck would be bent to keep me in his left eye, so all he would have to do is straighten his neck for relief. Then I might work my way in front of him for a little more of a challenge once he has had some success; then all the way to where I am standing on his left side, so he has to really commit and bend his neck to the left to look at me out of his right eye. That said, it is way more important how you do something than what you do. Take whatever time is necessary and adjust any project to your abilities so that you do not get hurt. As with any project, acquiring the timing for the release of pressure is totally essential for success.

“Occasionally I am asked if I am concerned about this procedure making a horse head-shy on his left side. Definitely not, because I am subtle with my approach, and I give him time to search for the answer.” 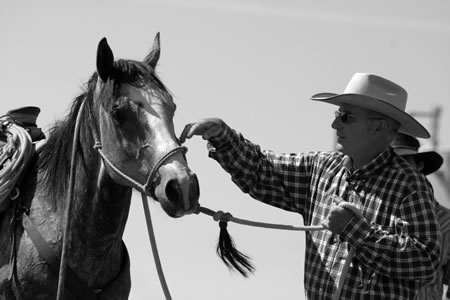 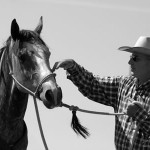 1.This horse is generally concerned about people and uncomfortable with me on his right side, so he defends it. Here is something to work on that lopsidedness. Instead of trying to make him let me be on his right side, I will simply discourage the left eye with my fingertips. I'll use just enough pressure to cause him to search, no more. 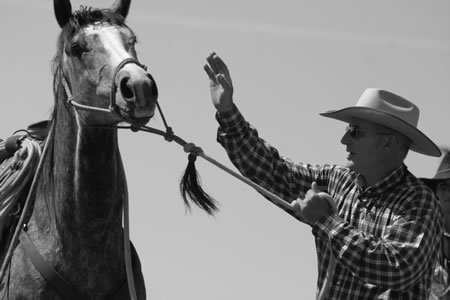 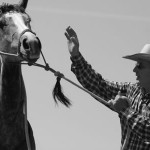 2.At first he'll wonder what the heck I'm doing. I won't increase my pressure. I'll be subtle and wait for him to find the answer I need. When he leans right, keeping me on his left side, he finds the pressure of the halter, and discovers that door is shut. He will keep searching for the place where the pressure comes off. 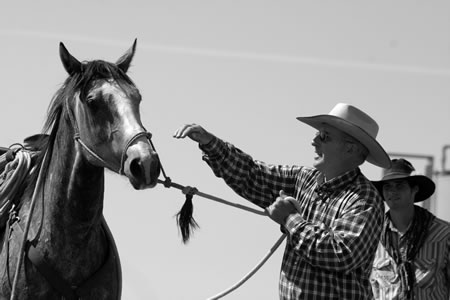 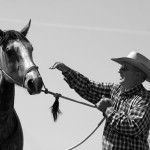 3. I'm patient and wait, keeping a little brushing motion with my fingertips. I might not have to touch him; the movement will be enough pressure to keep him searching. 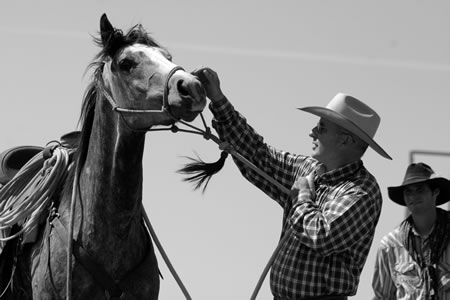 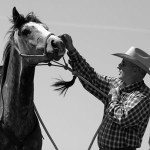 4. He might explore raising his head again; and again, he finds the pressure of the halter. I'll wait for him to find another answer. Soon, he'll try switching to his right eye. 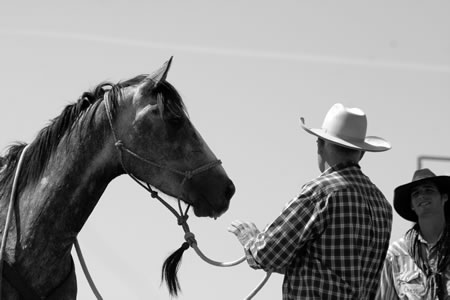 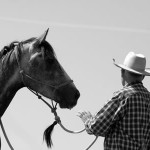 5.There. At this point I won't even pet him. A pet to an insecure horse may not be a reward, but more pressure. The relief is enough reward for now. See him lick his lips. 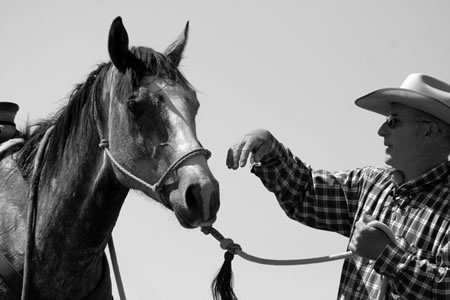 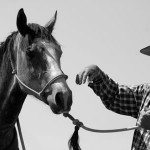 6. At first he might not be able to stand looking at me out of his right eye for very long. I'll start again so he can have another experience of finding the "right answer." 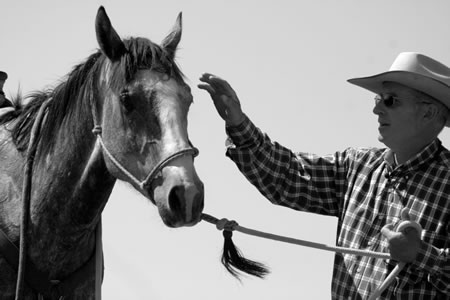 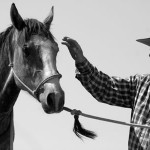 7. He'll be quicker to find the answer this time, having found a way out of the pressure that made sense to him the last time. 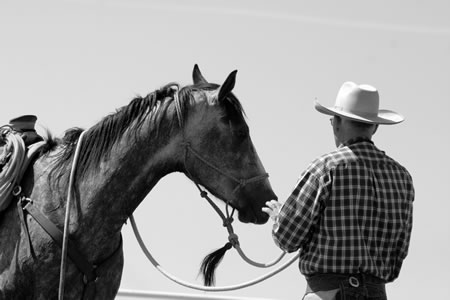 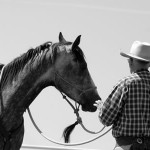 8. There. That came through with less searching. I won't pet him yet, his expression is still wary. Finding his way out of the pressure is enough of a reward. 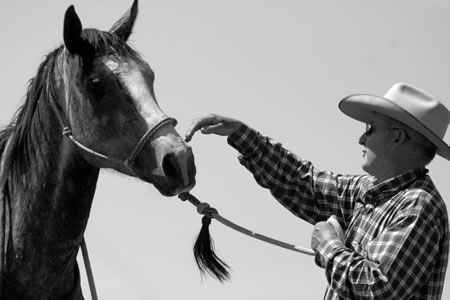 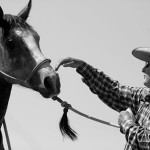 9.I'll start again. Every time he finds his way out of the pressure, he'll gain confidence and start becoming more comfortable. 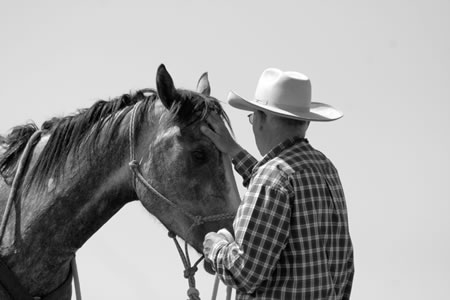 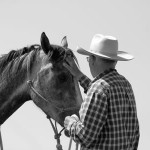 10. As he starts opening his right side to me, I'll quit. He's a little more comfortable, and I can pet him over his eye socket in subtle, soft and consoling way. 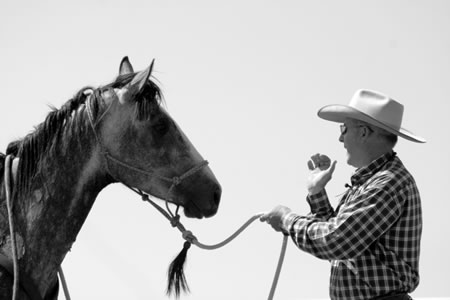 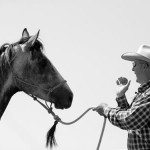 13.Eventhough I am standing a little more to his left side, he bends his neck to the left so he can look at me out of his right eye. He is making an effort to offer it. 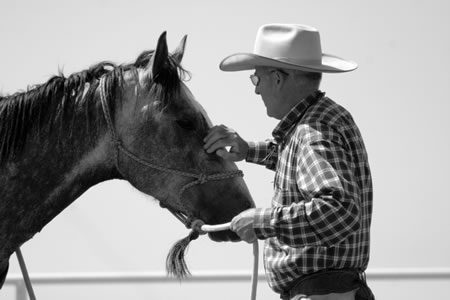 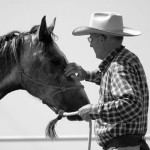 14. There are other ways to address this, but it has become his idea to have me on his right side. He is no longer feeling as though he has to defend it.